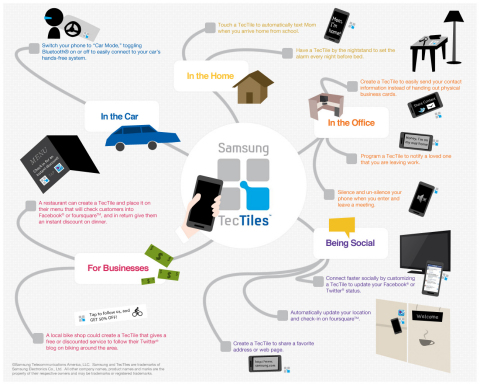 With the largest user base of NFC-enabled devices in the United States and TecTiles available in all four major carrier stores (AT&T, Verizon, Sprint and T-Mobile) and at major online retailers at the launch of the Galaxy S III, Samsung’s aim is to help ensure NFC becomes a part of daily life.

Here’s how it works: With a simple tap of an NFC-enabled phone to a TecTile, consumers are able to automate such everyday smartphone functions as sending a “headed/at home” text message, silencing the phone when entering a meeting, setting an alarm, and dimming the display when going to bed.

“With millions of NFC-enabled Samsung Galaxy smartphones currently in the market and the arrival of our flagship device Galaxy S III, Samsung saw an opportunity to expand the value of NFC beyond mobile payments,” comments Dale Sohn, president at Samsung Mobile. 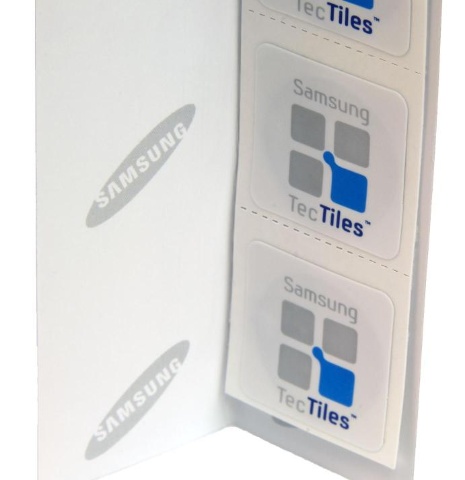 Priced at $14.99 for a pack of five, TecTiles programmable NFC sticker tags can be purchased online and in AT&T, Verizon, Sprint and T-Mobile stores. The Samsung TecTiles app is now available for download at the Google Play store.

Samsung TecTiles can be programmed with any NFC-enabled smartphone, including:

Here are some of the TecTile functions:

Zaslav on Top With AT&T-Discovery Merger

Discovery CEO David Zaslav has spent the last 15 years building a factual content empire, but a $43 billion merger with WarnerMedia will soon have him overseeing a dynasty with more than 20 traditional cable networks, two young streaming services, and probably a partridge and a pear tree.