Cable network operators are traditionally known for operating wireline access networks, as in building and maintaining the cable run from their network to your home. While this cable access segment is still vitally important to providing reliable services, 21st century consumers have become increasingly used to using their services on the go via a wireless access network, or WAN. To facilitate this mobility, cable network operators have made independent decisions to:

The new kid on the wireless block is Citizens Broadband Radio Service (CBRS). CBRS is 150 MHz of spectrum in the 3.5 to 3.7 GHz band. It is envisioned that the CBRS band will be used for rapidly deploying 5G services and will significantly lower the barrier to entry for a wide range of operators who may not be currently in the LTE network business. Besides conventional small cell coverage, CBRS will support Fixed Wireless Access and private LTE networks, opening up more opportunities for the cable industry to offer wireless service.

The Federal Communications Commission issued rules (FCC Part 96) for use of the CBRS band in 2017. Fundamental to the FCC rules is a three-tier authorization structure:

Access and operations of the CBRS band will be managed by a Spectrum Access System (SAS), in accordance with the FCC rules. The primary roles of the SAS will be to accept user requests to register against their specific access tier and to authorize when a user’s device can transmit across a specific frequency. 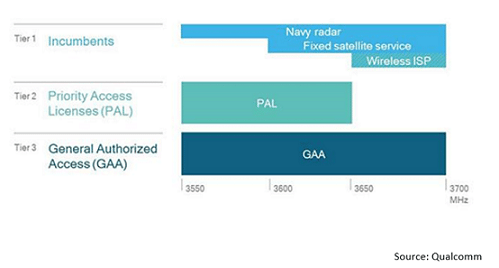 Two industry bodies, the Wireless Innovation Forum and the CBRS Alliance, have been focused on making the new CBRS spectrum available to consumers. The WInnForum lists its membership at more than 60 companies and, through its Spectrum Sharing Committee, is creating standards that support the sharing technologies based on the three-tier architecture. The CBRS Alliance also lists 60 companies as its membership and is focused on certifying equipment for rapid deployment in the CBRS band.

CBRS will be heavily featured at this year’s SCTE•ISBE Cable-Tec Expo®, with five speakers addressing the topic. Scheduled from Monday, Oct. 22 through Thursday, Oct. 25 at Atlanta’s Georgia World Congress Center, Cable-Tec Expo is renowned as the pre-eminent venue that combines the thought leadership, engineering innovation, and deal-making that power the technological future of broadband telecommunications.  Registration for SCTE•ISBE Cable-Tec Expo 2018 is available at expo.scte.org/attendee-registration.