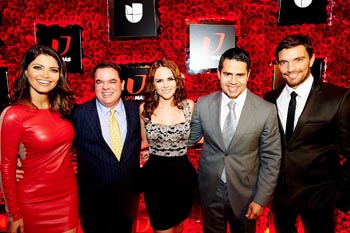 “We’ve had a great year at Univision,” Univision president Cesar Conde told CableFAX at an event Tuesday in New York City, with the launch of Univision Deportes, Univision tlnovelas and UVideos digital video platform as well as a logo revamp for Galavisión. Moreover, the English-language news network with ABC will launch in September 2013. The goal with the rebrand is to “superserve” the net’s audience, he said, particularly young males, which is currently its fastest growing demo.
Telefutura represents a tremendous opportunity for Univision, Conde said, and with ratings having increased 35% year over year the net has been able to attract top producers of Spanish-language content, including Colombian broadcasters Caracol Televisión and RTI Colombia and Televisa. The name UniMás connects the network to the Univision brand, he said, and will deliver a “grittier” style of original programming targeted at younger male Hispanics.
An increase in sports programming is another feature of UniMás. And while traditionally popular sports like soccer will continue to get play, “alternative” sports will be explored as well, said Conde. The CONCACAF North American soccer league, the 2014 World Cup and the Mexican National Team will be featured on the net, in addition to professional boxing shows like “Solo Boxeo.”