Are you caught up in California Chrome fever, but aren’t exactly sure what to do about it? We’ve got you covered. We spoke to Scott Hazelton, producer/reporter for 24/7 horse racing net HRTV, about the race and horse racing, getting the inside scoop so you can appear in-the-know as you sip your Belmont Jewel on Saturday. 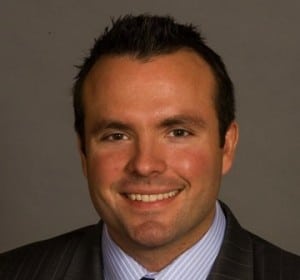 What you’re advice to those of us who never wager on a horse unless it’s during the Triple Crown? What should we do Saturday?

If you’re a novice, you want to place a few bucks on California Chrome, especially if you’re going to the racetrack. I think there’s going to be a lot of people buying souvenir tickets because if he does end up winning the Triple Crown. But you’re not going to end up making any money if he ends up winning. The thing about going to the races for the first time, there’s no wrong way of approaching it. I can’t tell you how many times I’ve taken close friends to the races for the first time and they’ve made money by betting the dopiest thing possible, be it the color of the horse or name or whatever it is. There’s no wrong way of approaching it. After doing this my entire life and working at HRTV for 10 years, you tend to overthink it a little bit.

The horse I do like in the race is Wicked Strong. This whole entire time I’ve gone against California Chrome, and it’s not because I don’t like the horse. It’s just I didn’t think he was going to win the Derby, and in the Preakness, I knew he wasn’t going to be enough of a price to make any money to justify a bet. And now in the Belmont, it’s the same thing.

A lot of us remember Smarty Jones and how close he came. Does this feel different?

Everybody wants it to feel different. It’s not different. There’s nothing different about this vs Smarty Jones or Big Brown or Silver Charm or any that we’ve seen in our lifetime. It feels different because we like these connections so much more. The only horse we can compare him to in that sense is Smarty Jones because he was so likeable and his connections were so likeable. In all honesty, some of the most recent, even Big Brown, I don’t think people were necessarily rooting for the connections and they were tough to get behind. For this horse and the story behind it, we so want it to feel different because we so want it to turn out different.

Everywhere you turn, there are headlines that read: Will California Chrome save horse racing? What’s your perspective on this? Is it overblown?

I think it is a little overblown to think that one horse and one outcome is going to save racing. He’s already done so much for racing. As it is now, I don’t know how much more he can do through his victory… There’s not going to be one magic instant where everyone will call it that will save racing. It has to be uniform change across the board—uniform rules instead of state-to-state rules. There are a lot of things that the mainstream doesn’t necessarily realize that need to change to start to save racing. A Triple Crown winner would be fantastic, but if we see a Triple Crown winner and we never see him race again, what’s that going to do for racing?

I kind of hate that idea of “save racing.” I don’t know where it’s going. Are we suddenly not going to have racing tomorrow or next week? To think that it’s going to go away instantly is insane because it’s obviously thriving with the attention we’re getting with the Kentucky Derby. You see the amount of people who go to these big races. You have to concentrate on these people going out to the big races. You’re not going to see 40,000 people each day or each week for that matter. Those days are gone. Sports these days are built for television. That’s what horse racing has to start to move towards, and I really think they are through partnering with Fox, NBC and having stations like HRTV.

NBC has the rights to Saturday’s race. But HRTV has a lot going on as well.

We cover every aspect of not only the Belmont Stakes on Saturday but all aspects of big races that are going on. This day of racing is one of the biggest days of racing we’ve ever had in North American racing. And that’s not being overbuilt… Belmont has stockpiled a ton of great races on Saturday. There are ton of great champions running on the undercard. And we’re covering every aspect of the Belmont Stakes. Our “Pursuit of the Crown” show is airing live from there right now.

You’ve been at HRTV for 10 years. How have you seen the sport change?

It’s grown as far as mainstream media. When I first started 10 years ago, there would be racing on ESPN and NBC and it would be Derby, Preakness, Belmont and Breeders Cup and you never saw racing again. Now, you’re moving upwards with NBC announcing many more dates they’re going to be covering racing through the summer up through the Breeders Cup… The experiences at the racetrack [also]. Not only on big days, but on weekends. Here at Santa Anita Park they’re starting to realize that sure there are people who are going to want to come out to the racetrack because they want to gamble and that’s all they want to do. But they’ve realized to get other people out you have to have other things going on. So for example, this Saturday at Santa Anita they’ve got huge infield quest going on, and they have bands and a craft beer festival. All these other experiences to keep yourself busy during the course of the day along with horse racing going on. That’s one of the biggest things that has been a positive change that I’ve seen in the last 10 years.

As big as this race is, you have something you’re keeping closer watch on. I understand your about to become a daddy. Any chance you’ll consider California Chrome or Wicked Strong as a name?

Absolutely not. As much as I love racing, I keep my family separate from all this. My wife had never been to a horserace in her entire life when we met. That’s why I stayed home… There is going to be a Belmont Stakes every other year for the rest of our lives.