Tivo has revealed the results of the 18th edition of its quarterly Video Trends Report, providing insights on consumer behavior in Q2 2017. Over 3,050 consumers took part in the report, which covers topics centered around pay-TV, VOD, OTT, streaming devices and more. The report shed light on the viewing habits and dissatisfaction of viewers across these platforms, to some surprising results. 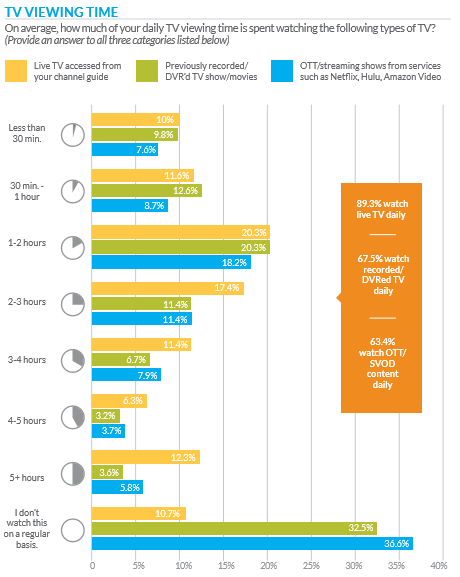 As far as their viewing habits, survey participants were active daily viewers of both live TV and recorded programming. 89.3% reported that they watched live TV while 63.4% said they engaged with OTT platforms or streamed shows each day.

Regardless of the platform, they’re actively choosing to engage in order to watch their favorite shows. Through Q2 2017, 82.6% of respondents watched 10 or fewer shows. Just over 80% said that they watch fewer than 10 channels, indicating that once they’ve found one that works, they tend to stop exploring their channel guide.

Despite the variety of options in both the MVPD and vMVPD space, distributors still haven’t perfected the formula on the perfect pick-and-choose model. 77.5% of those surveyed noted that they wanted a truly à la carte model, something that isn’t yet available on the marketplace.

They weren’t appeased by skinny bundles either. Popular bundles like PlayStation Vue and SlingTV only met the preferences of 43.6% of respondents. One of the biggest issues found seemed to be that while there are a number of companies offering skinny bundles, there is a considerable amount of overlap in their programming. The platform that begins to diversify its offerings could have a way in with these unsatisfied cord-cutters.

One of the biggest revelations from the report came from the sports scene. When asked what channels they would pay the most for across all genres, ESPN did not appear in the top 10. Shockingly, two specialty networks made the cut. Respondents were willing to pay $2.13 for NFL Network, granting it the sixth rank, while MLB Network came in just behind in the eighth position at $2.04. 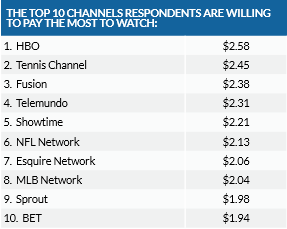 Though surprising, the results are in line with ESPN’s struggles over the past year. Receiving a $1.81 price value from the respondents, consumers valued the more focused content streams on other specialty nets than the overarching sports content featured on ESPN.

With Valentine’s Day around the corner, Verizon is giving customers deals on select phones, smartwatches and more. Customers who purchase an iPhone 14 Pro with certain phone trade-ins and 5G