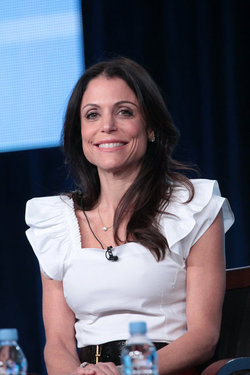 Bethenny Frankel wasn’t shy about her often-controversial life, which helped Bravo bag big ratings during her “Housewives” heyday and has continued with “Bethenny Ever After” (S3 premieres Feb 20). She acknowledged that after the sale of her business for millions (and controversies that have followed), she doesn’t need the show but wants an outlet to reach fans. “The minute I sold my business, it was like someone was waiting at my door with a baseball bat ready to hit me,” she said, calling herself a “survivor.” Meanwhile, Bravo evp Andy Cohen said he’ll continue to push the creativity envelope on his show “Watch What Happens Live,” with plans for a “Ralph Feinnes Pajama Party” this year (We’re not sure we know or want to know what that will entail).

SyFy had some fun with critics, enlisting one of its own—Knoxville News Sentinel writer Terry Morrow—to participate in a live demo of its new “Total Blackout” game show (premieres spring) in which contestants must face their fears in total darkness. The net piped in live video of Morrow and various SyFy talent nervously groping around fish tanks as they tried to guess each tank’s contents (a feather duster, live eels and a live foot). Producers said they’ll constantly change up the games to keep contestants on their toes. “It’s a lot of laughs for the people at home, and it’s a lot of fear for the people who are living it,” said host Jaleel White, best known for playing Urkel on ’90s sitcom “Family Matters.” The show concept has already hit in a dozen other countries, so producers are banking on plenty of US victims vying for the $5,000 prize. SyFy pres, original content Mark Stern said the show highlights the power of anxiety when you lose one of your senses. “Your mind fills in the blanks,” said Stern.