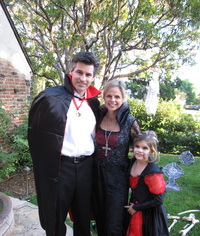 Best Advice in 7 Words or Less: Work hard, be honest, don’t quit, have fun (I cheated a bit)

Why Him? Hopkins has headed up affiliate sales and marketing for several years. With the departure of Tony Vinciquerra and subsequent executive rejiggering, he’s added development of digital strategies to his purview. Digital, of course, is a vital growth engine for the media company, putting Hopkins in a key strategic spot. However, this past year was a tough one for the group, with many contentious deals with affiliates. And Hopkins has done some reshufflling of his own, restructuring his division in September to better align the group’s leadership.

Eight Days a Week: Fox raised plenty of eyebrows when it rolled out its eight-day online windowing strategy this year. Now, the networks hold back their programming from online venues like Hulu and Fox.com, except for authenticated subscribers, for more than a week to protect its core distribution base of TV viewers. It’s a risky bet, but one that a few others in the business have already followed.

Year Ahead: Hopkins has said he’s worried about cord-cutting. Will this phenomenon have a deeper impact on Fox in 2012?

My favorite “going out” town: New York City, of course.

What puzzles me most about Millennials is: Their sense of entitlement.

What I admire most about Millennials is: The confidence that the sense of entitlement gives them at a young age. ?