INTX Blows Into the Windy City

It’s not the Cable Show any more. NCTA announced last fall that it was transforming its annual trade show into INTX: the Internet and Television Expo. As the industry prepares to gather for the inaugural INTX in Chicago May 5-7, we caught up with the event’s co-chairs to discuss the rebranding and what to expect while you’re in town. This is Suddenlink chmn/CEO Jerry Kent’s third time hosting the NCTA show in Chicago, while it’s TV One/Radio One pres/CEO Alfred Liggins’ first time spearheading the event. Both expressed excitement at the idea of sharing the floor with companies outside the traditional cable arena. And while everyone is sure to be murmuring about the breakup of the Comcast-Time Warner Cable merger, there are several other hot topics on tap for this year’s Expo. 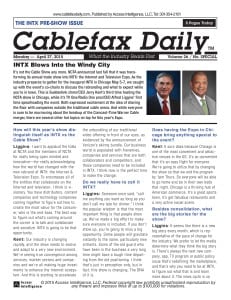 Don’t forget. Friday is the deadline for Cablefax ’s Program