Investigation Discovery is the most popular network among adults interested in dropping their cable subscription. Long Island-based Beta Research Corporation recently asked adults who indicated they are very interested in dropping their cable subscriptions to rate their interest in various digital basic/mid-sized/emerging cable networks. The results, provided exclusively to Cablefax, show that 70% of potential cord cutters surveyed rate Investigation Discovery (aka Discovery ID) a “4” or “5” on a five-point interest scale. Other popular networks with customers considering taking the leap include FX Movie Channel (68%), Crime & Investigation Network (68%), Sony Movie Channel (67%), Discovery Life Channel (66%) and Cooking Channel (66%). It’s worth noting that no sports or news channels show up at the top of the list, perhaps lending credence to the idea that potential cord cutters would be interested in a lower-priced entertainment-only skinny bundle. Beta also notes that 33% of all pay-TV customers surveyed are either “extremely” or “very” interested in cutting the cord in favor of OTT offerings. 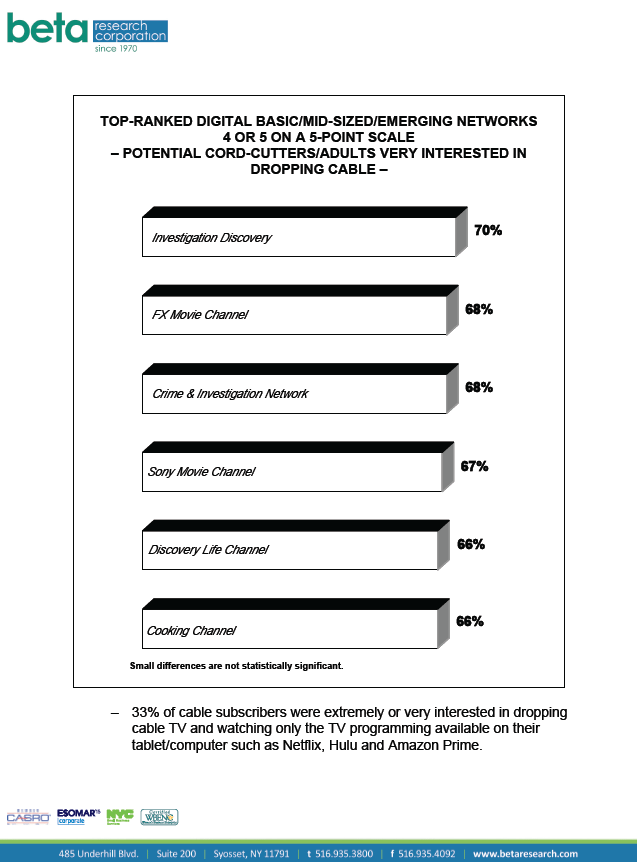 In the more widely released portion of its report, Beta looks at which basic cable networks drive the most interest among those who have already cut the cord or never had cable to begin with. Discovery’s flagship network leads the way, with 49% giving it a “4” or “5” on the same five-point scale. Other top performers include History (45%), Food Network (43%), National Geographic (43%), Comedy Central (41%), FX (40%) and AMC (39%).

Longtime C-SPAN political editor and host Steve Scully is making his exit from the network on July 6. His next move is to the Bipartisan Policy Center , a think tank dedicated to combining the best ideas from