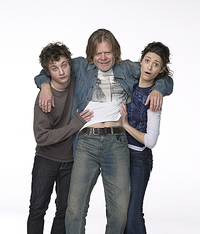 Even the most talented writers and actors can fall on their faces when attempting to create something uniquely new and innovative. It’s a tough and risky adventure—and one that has tripped up many a showrunner. But Showtime’s “Shameless” succeeds on so many levels that it’s hard to know where to begin. The show—adapted and Americanized by John Wells from Paul Abbott’s British series—follows the tragic but loveable Gallagher family as they plot, scheme, cheat, steal and railroad themselves into our hearts. It’s a breakout performance for Emmy Rossum, whose Fiona takes care of the family while drunken patriarch Frank (William H. Macy) spends any extra money on booze. The trick of the show is that you don’t hate the guy—partly because his family loves him so much despite his selfish and self-destructive ways. You want to hate him. You really do. But you can’t. And whether it’s stealing toilet paper from a public restroom or defrauding taxpayers in a Social Security scam, we understand that the Gallaghers are all about survival, family and unconditional love. The fact that these themes come through against a backdrop of immensely dark humor is a testament to the writing and acting skill involved.

VIDEO EXCLUSIVE: Check out a video clip of the 2011 CableFAX Program and Top Awards, featuring interviews with Program Hall of Famers