There were, however, a few people watching something other than football this past week. VH1’s “Love and Hip Hop Hollywood” kept its momentum with 1.734 million average viewers, live + SD, on Monday night. And “WWE Raw,” the “Talking Dead” special and “Black Ink Crew” all made the top 10. See below for the full chart. 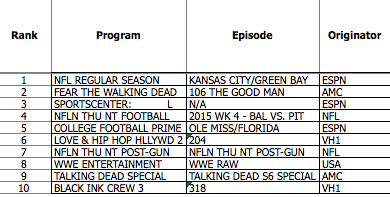 Telemundo is launching celebrity dance competition reality show “Así Se Baila,” set to premiere on the network in September. Episodes will also be available to stream next day on Peacock as well as live