The popularity of TV streaming services has been solidified yet again, thanks to SRG’s 10th annual ‘Must-Keep’ TV Report. The report interviews American consumers, noting which TV channels and video services they view as essential to their households. This year’s edition of the report included streaming services for the first time, causing major shifts in the usual rankings of traditional cable channels.

Netflix ranked fourth overall in its first appearance in the study, knocking FOX down to the fifth spot on the list. This marks the first time that the big four networks – ABC, CBS, NBC and FOX – have failed to occupy the top four positions. 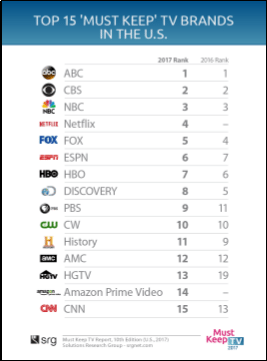 Netflix was not alone in finding success. Amazon Prime video and Hulu also found spots within the top 25 among viewers ages 12 and older, and all signs lead to more growth in the near future. More U.S. households now have subscriptions to streaming services than a DVR, a sign of their developing importance in the lives of younger Americans.

In addition, the three streaming services also ranked highly with the 18-34 demographic, with Netflix claiming the top spot. Cable channels were not without growth in younger demographics, as NBC, FX, HGTV, History and Travel have all shown upward momentum. 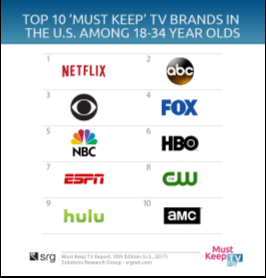 Despite Netflix’s breakthrough performance, this doesn’t mean the end of the line is coming for the big four. In 2017, 72% of those interviewed included at least one of these networks on their must-keep channel list. Although this represents a marked 11-point drop from the 83% high seen in the 2007 report, a strong majority still acknowledge a need for these core institutions. Women are especially supportive of the big four. ABC, CBS and NBC took the top spots, with Fox falling to No. 5 behind Netflix. The big four beat out popular cable channels like HGTV and ESPN to maintain their positions atop the list.

Conversely, consumers indicated they value cable news brands more than ever, with CNN and Fox News taking the No. 15 and 16 spots, respectively. CNN is more popular among younger viewers, as it was ranked No. 15 among 18-49 demographic, while Fox News was far behind at No. 28. CNN’s perceived value to viewers is not consistent with ratings reports, as the channel has consistently rated far below Fox News and MSNBC over the past year.

Sports cable channels have also experienced success among the 18-49 population, primarily with males. ESPN ranks No. 5 overall, and has been the No. 1 cable channel in the demographic for the last decade. Fox Sports 1 and ESPN 2 have remained stable, landing in the No. 20 and 25 spots.

HBO hit “White Lotus” is extending its stay a bit longer. The series has been renewed for a third installment following the continued success of its second season. Season 2’s debut has been watched by more than 7.6 million viewers thus far.