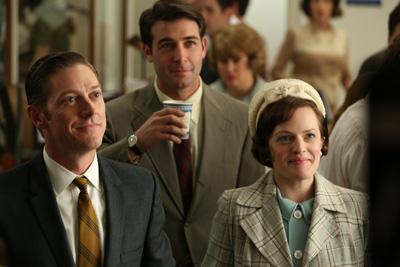 We know Matthew Weiner hears us because we watched "Mad Men" Sunday night and the famed series creator brought to the table a steaming stack of what we asked for; and there was a pat of margarine on top. It’s what we needed and nothing else would do.

Weeks ago in this blog we mentioned that we’d hoped to find out more about the love calculus of the man Burt Peterson called a “cold fish,” the enigma known as Don Draper, ne Dick Whitman. We wanted to know what Don is thinking when he betrays his gorgeous, young wife Megan in favor of his neighbor and married friend Mrs. Sylvia Rosen. In addition, we wanted material to answer the question posed to Don during last season’s final moment: "Are you alone?"

It’s apparent from last evening’s proceedings that Don needs to ask Roger Sterling for the number of his psychiatrist. There are a host of unresolved issues there. Weeks ago we saw flashbacks of Don’s upbringing in a house of ill repute. Those scenes seemed like non sequiturs then, and perhaps they were. But now, in the light of Don’s hotel adventure with Mrs. Rosen, they make more sense.

On a gross level, Don needs a woman to make him the center of her attention, something he lacked from his step mother during his unpleasant childhood (recall Don’s own mother, a prostitute, died in childbirth). Don’s, er Dick’s, childhood was one of shame and fear, emotions that he continues to run from during his adulthood.

And speaking of things Don lacked during his childhood, the psychologists surely are having a field day with Don conjuring that scene for Ted Chaogh that begins with "We know it’s morning because" we hear the birds chirping, the farmer’s wife sets a hot stack of pancakes on the table, next to the yellowest eggs you ever saw. The point being: Is this the type of scenario Don thinks of when he cogitates on the bucolic childhood he never had?

But let’s get back to how Don’s early years are being expressed in his tortured love life. After all, Sylvia is getting anxious under the covers. At the moment, Megan Draper is anything but needy. She’s in the middle of an exciting new career as a television star. Although her mother urges her to make Don feel wanted sexually, advice that Megan seems to be listening to, she doesn’t depend on Don for stimulation the way homebound Betty Draper did before the bubble of their marriage burst. For a moment or two, Sylvia seems to need Don as much as he wants a woman to need him. Despite overhearing the bad side of Sylvia as he was standing in the elevator at their apartment building and having a lot to do at work, Don can’t resist her plea that she “needs” Don and “nothing else will do.” In fact, he asks her to repeat those words to him during a very heated round of foreplay.

[A Random Thought: Maybe Sylvia should go to work for SCDP. Her plea to Don that "nothing else will do" is a very nice turn of phrase. Besides adding a bit of adult perspective to the creative team, Sylvia’s presence in the SCDP office (or whatever the firm’s name finally is) would cut down on the cost of commuting to rendezvous points if she and Don and take up the affair again. For example, she and Don could share a cab from the office to the Sherry-Netherland. Alternatively, perhaps Megan could employ Sylvia to ghost write love incantations to Don, in a sort of gender reversal of Rostand’s “Cyrano” play, where the protagonist supplied love letters and poems to the tongue-tied Christian so he could woo Roxanne.]

Another point to make about Don’s domination of Sylvia in the hotel room is his need to appear superior to people, both women and men. With men, we see Don engage in a round of "Mine is Bigger Than Yours" with Ted Chaogh, drinking his new colleague under the table during a so-called peacemaking session. Of course, Ted is avenged when he pilots a plane to Detroit and Don is visibly distressed by the bumpy ride.

Certainly we have to think that Don bedding Dr. Rosen’s wife is a victory for Don over the good doctor, a man of great accomplishment and whose medical successes Don envies.

The larger thought is that Don, despite his wealth and business victories, can’t quite shake his humble beginnings and the psychological damage they continue to do. [Right, we hear you saying "It was the same thing with Richard Nixon." Yes, you’re correct that some argue Nixon’s aggressiveness was due to the insecurity he carried with him from his humble childhood.] Indeed, Don is so ashamed of his upbringing that, as we know, he’s abandoned his given name and early history. “Would you have loved me?” if you knew of my dirt-poor origins, he asked Betty Draper several seasons back when she confronted him about his early life as Dick Whitman. The answer, probably, is that she might not have loved him had he revealed all during their courtship.

On the other hand, dominating people is a way to overcome fear and shame, and this, mixed with a desire to be needed, combined to make Don command Sylvia Rosen in a hotel room for a few hours in June 1968. That, and the sex was probably really good.

When it comes to how Discovery, Inc. will give back this holiday season, it’s asking viewers of discovery+ to make the call. The streamer’s audiences are asked to choose