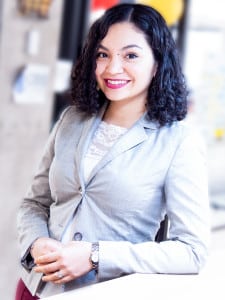 We all know the factors that drive audiences to watch a specific TV show:  Maybe the star is particularly popular at the moment, the ad campaign was sensationally effective, or word-of-mouth generated a ton of buzz leading up to the premiere.  But there are other factors – especially in today’s hyper-connected world – that are becoming more and more influential on viewers’ inclination to tune in.  Cultural, political and societal events and trends can penetrate audiences’ relationship to content when that content is relevant.  TV series that run parallel to issues or conversations that capture society’s attention are often amplified in popularity, potentially resonating stronger than they would otherwise because they appear to be part of something larger.

Among the political stories gripping the public since the presidential election is the Russian collusion investigation.  Headlines of the scandal have emerged all over television news outlets on a daily basis.  Amidst the controversy, audiences’ interest began to pique in the series The Americans, which also followed Russians intelligence operations.  Though set decades earlier during the Reagan administration amidst the Cold War, timing for the show was impeccable.  The Americans 5th season premiered in the spring of 2017 to demand that was over 60% higher than the previous season – or the season prior to the real-life Russian political meddling probe.

Topics outside of the political sphere can also impact the way audiences engage with entertainment, especially when those topics are controversial.  When Netflix’s first season of 13 Reasons Why was released in March of last year, a large part of the show’s audience was initially exposed to the series by means of the surrounding controversy.  Schools cautioned parents that the graphic content could be harmful for impressionable youth.  Since the theme focused on teenage suicide – as is often the case with the topic in general – psychologists warned it could inspire copy-cat suicides.

Despite the warnings (or maybe because of them), the series received wide-spread critical acclaim and became an international sensation. In terms of demand, it also performed differently than most other popular Netflix releases (with the exception being Stranger Things).  Usually Netflix series drive high popularity for the first few weeks post-release, causing the show to be among the most popular of the moment. The audience tends to binge it quickly, allowing room for the next series to step into the popularity spotlight.  13 Reasons Why was clearly a unique case, as it took hold of the top of the popularity rankings and held on for several months post its initial release. 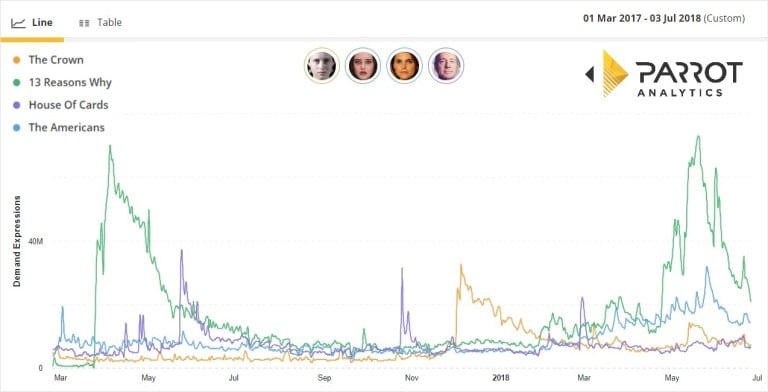 Controversy can transcend the show’s actual content and instead be attached to a leading actor – as we saw in the case of Kevin Spacey.  In late 2017, allegations surfaced that Spacey engaged in sexual misconduct with a minor.  In the era of #metoo where every allegation is heard and considered seriously, the news spread quickly.  Soon after, several others came forward with their stories of the actor’s inappropriate behavior.  Netflix fired Spacey from House of Cards following the scandal.  The falling-out didn’t result in a dip in the show’s popularity, however.  It actually drove the series to demand levels similar to past seasons illustrating that even negative attention can influence viewers’ interest.

It is not always controversy that inspires audiences to engage with a particular television show.  Sometimes it can be a lighter or more comforting pop culture phenomena.  A recent example is the royal wedding.  While a British tradition, the event is an international delight enjoyed by households all over the world and this year’s wedding was no exception.  While fans gushed at the real-life ceremony, once it was over they craved for more of the British aristocracy, turning to The Crown to satisfy their appetites.  The series, which follows the reign of Queen Elizabeth II, almost doubled in demand in the weeks following the royal wedding even though the most recent season had been released six months earlier.

While all of the series mentioned here are high-quality, critically-acclaimed successes, each is tied to an impactful moment that managed to move audiences; even in a time when it is harder than ever to capture attention.  While it is difficult, and perhaps even impossible, to predict what the next political/cultural phenomenon will be, it is evident that content that aligns with these events will result in audiences being more engaged than usual, producing elevated and sometimes protracted levels of popularity. If producers can tap into the cultural zeitgeist of the future by creating content that is in sync with the mood and sentiment of the times, they’re likely to have a hit. While we may not be able to see into the future, we can get some valuable insights through data analytics as to how audiences reacted to these phenomena over time, informing development and marketing decisions and increasing the odds of tapping into a wave of public interest.