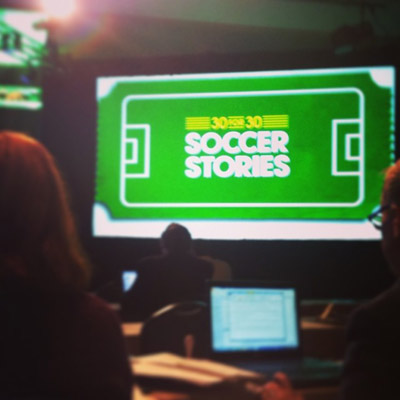 ESPN announced the upcoming "30 for 30: Soccer Stories" at TCA on Saturday

This past weekend ESPN announced the second offshoot of its 30 for 30 documentary series, “Soccer Stories,” a limited collection of films focusing on international stories surrounding the sport. It follows in the footsteps of Nine for IX, a group of nine documentaries on women’s sports crafted by female filmmakers and timed to premiere at the 30th anniversary of Title IX.

With the 2014 FIFA World Cup kicking off in June, coupled with the growing popularity of soccer in the U.S. generally, now’s the perfect time for it. Beginning April 22, one doc a week will air leading up to the World Cup. Additionally, ESPN will produce short vignettes about Brazilian culture, which will roll out during the broadcasts.

Topics tackled by the filmmakers include Diego Maradona’s epic 1986 World Cup performance to Hitler’s vain attempt to steal the coveted Jules Rimet Trophy. Other films have a more political or tragic slant. For instance, the first in the series of eight looks at the Hillsborough Stadium tragedy of 1989, in which 96 Liverpool fans were crushed to death during an FA Cup semi-final in Sheffield, England.

According to Libby Geist, director of development for ESPN Films, the series aims to go beyond the sports themselves and focus on the culture surrounding them. “These are political stories—they go way beyond soccer, and that’s our sweet spot,” she told CableFAX. Take “Hillsborough,” a story Geist said had already been greenlit for 30 for 30 prior to the genesis of Soccer Stories. “We realized when we were doing this collection what a great fit it was,” she said. The film is directed by Daniel Gordon, the man behind the 30 for 30 film “9.79*” about Olympians Carl Lewis (USA) and Ben Johnson (Canada).

Gordon has a personal connection to the disaster: He is from Sheffield, and he knew people connected to the events. That made his take on the story original, Geist said. “He had a hard time putting it together because he’s so emotional and he’s so attached to it,” she told us. “But for us… the fact that he really does care and he’s putting his heart into it is something that we always look for with all our films.” Gordon’s portrayal of the much-publicized event is more about the people who were there and affected by it, the investigations into the incident—which, until two years ago, falsely claimed Liverpool fans were to blame—and the effects it had on stadium safety in the aftermath.

ESPN will continue with 30 for 30 offshoots, Geist confirmed, and plans to pair up the series’ with tentpole events. “We’re looking forward to the next big events, where it’s not just a film or two to slot in,” she said. Two possible topics are college football and the Super Bowl, which has an anniversary coming up. “We’re working with our programming team to see what else is big enough that wants to carry something like this with it.”