The Marshals administer the Witness Protection Program. Fair enough, then, it’s not for nothing that the Marshals are known informally as “The Silent Service.” Mea culpa: Your reviewer has lived not 100 yards from the Marshals’ nondescript headquarters in Arlington, VA, for nearly 15 years. I had no idea.

While the Marshals are the oldest federal law enforcement agency—George Washington was serving his first term as president when the Marshals were created—and more marshals are killed in the line of duty each year than members of the FBI or CIA, the nature of the Marshals’ work necessitates a low profile. The FBI and especially the CIA also need low profiles. In any case, most of us know about the FBI and CIA. We know little or nothing about the Marshals.

One other thing the Marshals do—they’re the government’s primary fugitive hunters. They track people who’ve been convicted and somehow escaped.

In 1985, several marshals based in the nation’s capital were enjoying dinner at the home of marshal Toby Roche’s wife. It was Cuban food, in fact.

The marshals were trying to cook something themselves: a scheme to entangle a lot of area fugitives without spending a lot of money. (A hazard of being a low-profile service is that budget allocations also tend to be low.)

The marshals hit on a relatively simple idea: send known fugitives (yes, that’s an oxymoron) an invitation for two free tickets to an upcoming Redskins football game. Tell them they’d be guests of a new cable sports network. All they had to do was come to the D.C. Convention Center on game-day morning to pick up their two free tickets. While there, they’d be treated to a pre-game breakfast, again, courtesy of the new cable sports network, and later be driven to the game. (See the invitation above.) What’s not to like?

At the time, D.C. was Redskins crazy. The team was between Super Bowl wins of 1982 and 1987. Tickets were hard to come by…and free tickets, well, they were like gold.

In short, the plan, though risky, worked. The faux cable network received a bevy of acceptance phone calls almost immediately. Marshals posing as phone bank operators for the new sports network delighted in congratulating the winners of the free tickets while confirming their details, such as phone numbers and addresses. As one of the marshals said, “It’s amazing what people will do for free tickets.”

The risks? Some of the fugitives might recognize each other at the pre-game festivities. They also might be armed.

Another risk: offering 2 tickets to each fugitive meant members of the public would come along as guests. If things got rough, the result could be ugly. One marshal, who wanted to be on the Convention Center floor for the action, offered to come disguised as Santa Claus. No way, headquarters said, fearing the bad PR of a bloody or even a dead Santa Claus. The marshal came as the San Diego Chicken instead, his gun under his wing. Honest. See the photo. 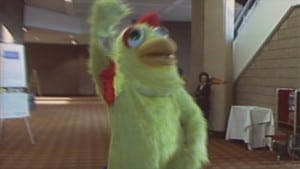 But what about the possibility of fugitives packing heat that day? The watchword for the marshals inside the Convention Center was, as “Fantasy Island” host Mr. Roarke used to say, “Smiles, everyone. Smiles.” The mood had to be upbeat to betray what really was going to happen—the largest single arrest of fugitives in U.S. history. The operation led to the arrests of 144 fugitives.

As the fugitives arrived that day, bands were playing, cheerleaders were cheering and the San Diego Chicken was hoping he’d not have to use his gun. After fugitives were checked in, one or two cheerleaders would come to escort the lucky winners to the main ballroom. En route the cheerleaders, actually marshals, would playfully grab the fugitives, in fact feeling for guns or other weapons. And if a fugitive seemed to have a weapon, the cheerleader gave him a balloon, a simple but effective signal to the rest of the marshals.

How does the invitation from ESPN figure into all this? The story is the subject of the latest installment in its “30 for 30” series, a terrific documentary endeavor. The 24-minute short doc, called “Strike Team,” might just be the series’ best. Certainly, it’s the one with the least to do with sports.

Perhaps the best part of this incredible story from a television point of view is that both the marshals and CBS filmed most of the goings-on: CBS for a story and the marshals for publicity and posterity.

Even better, filmmaker Willie Ebersol lets the footage speak for itself, adding a few interviews with the marshals, all of them now retired. Watching this doc with the marshals was, simply, a great thrill. The stories they told after were almost as fun as the film. Yes, the film is fun, great fun. Watch it, you’ll see. After all, it’s not every day you win two free Redskins tickets.

Maine’s attempt to force cable operators to make video channels (and individual programs) available to consumers on an a la carte basis received another blow. On Wednesday, the US Court Appeals of the First