Many baseball fans took note of the touching rendition of the “The Star Spangled Banner” at the start of Tuesday’s AL wild-card game on ESPN by Broadway star Aaron Tveit. It came after a moment of silence for the victims of the Las Vegas mass shooting. But those with closed captioning on might have been scratching their heads over whether there was a protest taking place during the national anthem.

As Tveit sang, the captioning incorrectly displayed the words “oer the land of the knee – of free” in the last line of the song. ESPN said it was assured by the third-party captioning service it uses that it was an honest mistake. It certainly was ill-timed given the recent controversy surrounding NFL players kneeling during the anthem.

“Our closed captioning is handled by a third-party company, NCI, that has done good work for us for many years. NCI assures us that this was an honest, unintentional mistake and they attempted to correct it in real time,” an ESPN spokesperson said.

In a statement, NCI apologized to ESPN and viewers for what it called an unfortunate error. “This error occurred because the steno captioner mistakenly hit one extra key on the Stenotype machine when trying to caption the word ‘free.’ The error was quickly corrected. This error was absolutely not intentional,” NCI said.

The error seemed to go unnoticed for the most part. A Cablefax editor was contacted by a viewer who saw it, and found a few users on Twitter who also noted the flub. For those unfamiliar with the world of captioning, a Stenotype machine is used—what you see in courtrooms. It does not have letters on its 22 keys, which means a combo of keys are stroked to equal certain individual letters. An NCI rep likened it to playing chords on a piano vs typing letters on a computer keyboard. 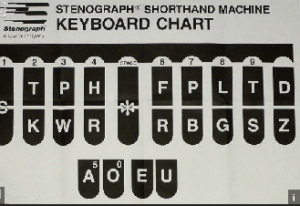 If you really want to dive deep and understand how this could have happened consider that the word “free” is actually stroked as TPRAOE (TP equals an F, then R, then AOE equals the long E sound). Knee is stroked as TPHAOE, with TPH equaling N, the H being the accidental letter stroked. The captioner in this instance had an error corrector in his dictionary in case he accidentally dragged in the letter R when captioning the word knee, which is why TPHRAOE translated as knee.

We’ve been assured everyone feels awful and that the captioner has been instructed to change the error corrector for “knee.” For our part, we hope the captioner doesn’t take it too hard. People with these skills are becoming quite rare. A 2013-14 report from the National Court Reporters Association found that the national average pass rate for certification is only 20-30% and the applicant pool has been steadily decreasing, with some states seeing as high as an 85% decrease in applicants.

The WICT Network is accepting applications for the Betsy Magness Leadership Institute Classes 46 and 47. Online applications must be submitted by 1pm ET on Feb 16. – NAB is