Michael Tatum was elevated to svp, Turner Brand Experience, placing him in a position to continue creating a consistent global brand presence for the company. His team manages the brand identity, production and maintenance of Turner’s corporate internet and intranet sites, production and delivery of branded assets, employee engagement activations, logo monitoring and fulfillment, photography and branded environments and presentations. Tatum has been a part of the Turner family since 1996, joining when it was Turner Home Entertainment. So many people need caffeine to power through the long work days, but not Tatum. “I’ve never had a cup of coffee, but have real angst about missing out on coffee culture.”

Marie Hughes has risen to svp, strategic media planning, a position that will see her continuing to oversee all paid linear and digital media planning duties for Adult Swim, Boomerang, Cartoon Network, CNN, TBS, TNT and Turner Sports. She’s recently also taken on the responsibility of all Turner cross promotion for the Turner portfolio of networks and digital assets, including Bleacher Report. She just joined Turner in 2014, previously serving as senior brand group director at Horizon Media in New York. Her portfolio is nothing to sneeze at. Hughes has worked on campaigns for HBO’s “True Blood” and “Game of Thrones” as well as History Channel’s “Hatfields & McCoys.” Hughes takes pleasure in the little things when she closes up the office for the day: catching up on new TV or streaming dramas, dining out and spending time with her family. 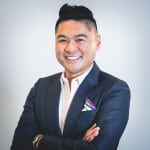 Media veteran Mark Jocson joined Rakuten Viki as svp, strategic initiatives and business development. He’ll be putting his experience to use by building partnerships meant to further the growth of the company’s brands. He’ll set his sights mainly on short-form content arm CREATED by Viki and Soompi, the largest and longest-running global news and community site dedicated to Korean pop culture. Before coming to Rakuten Viki, Jocson was the svp, digital media and games at Sony Pictures Television Networks, where he managed the business for just under 100 TV channels around the world and the mobile games publishing studio. A member of the Academy of Television Arts & Sciences and the Producers Guild of America, Jocson earned his Bachelor of Arts degree at UC Irvine and graduated with his Master of Arts degree from NYU, Tisch School of the Arts.

Verizon has been able to achieve upload speeds of 1.26 Gbps on its 5G Ultra Wideband technology in a live network test environment. The testing, which included lab work and field trials, has been focused on