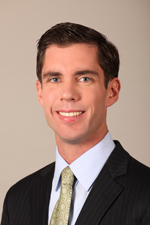 Patrick Cavanaugh
YES Network has promoted Patrick Cavanaugh to svp, Finance. Formerly vp of Finance and Controller, Cavanaugh will replace Allan Gaherty who will retire at year’s end. He’ll oversee all financial matters at YES, including reporting, analysis, budgeting, strategic planning and credit facility. Cavanaugh started at the network in 2002 as senior accountant, and prior to that he worked at PricewaterhouseCoopers as a senior associate in the in the technology, information, communication and entertainment practice of the Assurance Services business. Patrick enjoys spending time with his wife Audrey and his eight-month-old daughter, cheering on the Yankees and the Villanova Wildcats and boating at the Jersey Shore.
Jeff Burdett and Lucas Meyers
The Texas Cable Association has hired Lucas Meyers as director of governmental relations and promoted Jeff Burdett to vp of government relations. Previously, Meyers was senior policy adviser for Lt. Governor David Dewhurst, where he focused on policy and budget issues for numerous topics, including telecommunications. He also worked for state Representative Vilma Luna and the law firm Skadden, Arps, Slate, Meagher & Flom LLP as well. Playing golf and rugby are his preferred pastimes. Burdett has been the director of government relations for the association for the past six years. Prior to that, he was legislative director for state Senator Mike Jackson and state Representative Peggy Hamric. Jeff spends his free time playing drums in a rock and roll band. Additionally, he’s serving his first term on the Sunset Valley City Council.
Stephen Davis
In a move to integrate all content creation, Hasbro Studios has named Stephen Davis president. Initiatives for TV, film, commercial productions and short-form content will be combined under one entertainment division, which will facilitate content development across the company’s global franchises. Davis will also head up Hasbro’s Film Group in Los Angeles and its Rhode Island-based studio that creates commercials and short-form content. Davis has been responsible for the company’s global TV development, production and distribution since the studio launched in 2009. Under his watch it produced hits like “Transformers Prime,” “Littlest Pet Shop” and “My Little Pony: Friendship is Magic.” Prior to landing at Hasbro, Davis led Granada America and Carlton America, digital media company InfoSpace, TV production company Hamdon Entertainment and Family Entertainment Group, where he served as CEO. Stephen’s favorite sport is scuba diving, a hobby he’s taken to every continent in the world. Also, his favorite thing to cook is a fried egg and cheese sandwich.
George Kajos
SeaChange International has hired George Kajos as general manager of its Platform business unit. He’ll lead the product development division in charge of the SeaChange Adrenalin video platform and SeaChange Nitro service. Kajos has worked in the field of video streaming and networking for more than 30 years and has managed numerous engineering groups that have designed advanced products for the cable industry. Roles included director of engineering at Motorola, vp of advanced engineering at VOD tech provider Broadbus Technologies and co-founder and vp of software engineering for Gotham Networks. When he’s not working, he’s working out. Or skiing in the mountains throughout New England.