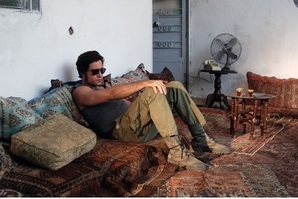 We considered some pretty big names for Best Actor this year. Bryan Cranston. Stacey Keach. Jon Hamm. But in the end, Edgar Ramirez’s chilling portrayal of 1970s terrorist Carlos just spooked the hell out of us. How could a man who seems so darned likeable and “normal” be the same guy willing to chuck a firebomb into a coffee shop as if casually tossing a cigarette on the ground? Carlos is a complicated, twisted and committed murderer, to say the least. And Ramirez plays him not as a psychotic lunatic but as a calm and reasoned political activist—who just so happened to plot horrible terrorist acts in the service of his goals. Carlos is a monster, but Ramirez plays him as a sober technocrat. It’s off-putting for the audience. We know that deep down he’s just a serial killer using a cause to justify his pathology. We never root for him. But we can’t help but care about him. How did Ramirez pull that off? Damned good acting.

VIDEO EXCLUSIVE: Check out a video clip of the 2011 CableFAX Program and Top Awards, featuring interviews with Program Hall of Famers.

Sports giant ESPN says it’s sitting out sending staff to China for the Winter Olympics due to COVID-19 concerns.