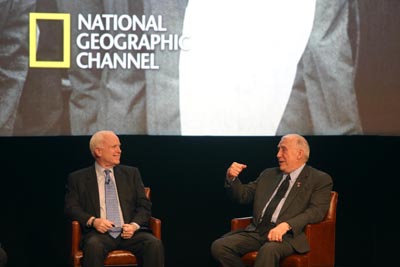 LIGHT MOMENT: Sen John McCain (R-AZ) and Ernie Brace (right) reminisce
at Nat Geo headquarters April 15 about meeting for the first time, in 1973,
after being held as POWs in Vietnam. McCain spent 5 years in captivity,
Brace nearly 8 years. Their intertwined tales are told in the premiere ep of
season IX of "Locked Up Abroad" (April 17,9pm, Nat Geo Channel).

Say what you will about the politics of Sen. John McCain (R-AZ). And today, as I write, there’s much to say. In just the last few days McCain has been in the middle of the Senate’s immigration bill; he’s also called North Korean dictator Kim Jong Un a “clown” and “a fool;” and on Tues the senior Senator from Arizona was scheduled to give a speech praising Bill Clinton for pushing normalization with Vietnam during Mr. Clinton’s White House years.

It would be naïve to say that for about one hour Monday evening, John McCain was no longer a Senator, but it was close. For that period former Navy pilot McCain, 76, joined Ernie Brace, 81, the longest-held civilian POW in the history of the Vietnam War, on stage at National Geographic Channel headquarters in Washington, D.C. They were there to discuss their years in captivity, which began separately but intertwined for a critical period. Those stories will be told Wednesday evening at 9 as “Locked Up Abroad” begins its ninth season on Nat Geo Channel. The two men are linked by serendipity. Several years into his captivity, Brace, a former Marine pilot flying for a CIA-backed airline, was moved into an empty cell at the infamous Hanoi Hilton prison behind McCain’s. For two prisoners who’d been in solitary confinement for extended periods, it was a life-saving moment.
Clarification
Before we continue, it’s important to qualify something: McCain and Brace don’t revel in re-telling their stories in front of an audience, even a friendly crowd, such as the one assembled Monday night of friends, family, veterans, Hill staff and media. Like many who’ve served their country and endured enormous suffering—McCain spent 5 years as a POW, Brace nearly 8 years, most of it in solitary confinement—these two heroes provide details grudgingly.
They relate in passing the conditions, a cement slab that served as a bed, the beatings, picking more than 200 bedbugs off a fellow prisoner. Yet Brace, an articulate man, never mentions that he spent almost four years confined to a small cage in the jungle. Even during the episode, which goes into some detail, much of it harrowing, most of McCain and Brace’s remarks seem dispassionate, in keeping with military honor and people who don’t believe they’re heroes. Still, it’s powerful to be in their presence, and their stories are captivating in person and on screen.
When they spoke for longer than a few minutes Monday evening, it was generally to praise each other, a superior officer or the courage of a fellow prisoner. You realize pretty fast that the men who survived this ordeal are enormously dedicated to each other, to this day. “He was my inspiration,” McCain said of Brace last evening. In return, Brace lauded McCain for getting him over “my [emotional] slump.” None of it is done with the false bravado so prominent in Washington, D.C.
Brace also noted McCain helped by getting publicity for his case. Since Brace was a civilian he was not covered by the Geneva Conventions, thus he could not write to his family or receive mail. In the two short letters per month McCain was allowed, he mentioned Brace. McCain instructed his family to contact Brace’s kin.
Communication is Key
Back in the Hilton, though, speaking was a privilege not afforded prisoners. Those caught communicating were subject to “an instant beating,” McCain says during the program. He and Brace "spoke" to each during their captivity via a tapping language, literally tapping on the wall that separated their cells. Carefully, they eventually also began actually speaking, albeit very softly. Both men acknowledged Monday that communication saved their lives. “Those who didn’t tap…for whatever reason…or weren’t allowed to, didn’t do as well,” McCain said. Both insisted after a bit of time they were able to tap rapidly. “The tapping went as fast as the old Morse Code operators,” Brace said. McCain agreed, “We could almost tap as fast we could speak…we literally got our orders that way, from our superior officers,” he said.

Despite their nearly three years of Hilton captivity, McCain and Brace met face-to-face only after the war, during a ceremony in the Nixon White House to honor POWs. They embraced, McCain recalled last night. This reunion sandwiches the "Locked Up Abroad" episode, which largely deals with Brace’s ordeal. It’s a good call. “His story makes mine seems like a day in the park,” McCain says during the episode.
Veteran journalist Tom DeFrank, who covered POW stories for “Newsweek” as the magazine’s White House correspondent and was on the tarmac in the Philippines the day McCain was released, was a superb moderator for the brief chat between McCain and Brace Monday night. He filled in several of the holes McCain and Brace left in their accounts. DeFrank described his days covering POWs getting off the planes, coming to freedom after years of captivity. “The entire press corps was in tears,” DeFrank recalled. Later he said the moment was “a lesson in the resilience of the human spirit.”
A Question Answered
“I’ve always wondered all these years,” he asked McCain and Brace, “did you decide not to use wheelchairs [when you came off those planes]?…you were the walking wounded but you never used wheelchairs.” McCain, who was on crutches at the time, recalled, “We decided to stand tall.” Brace added, we didn’t want to give our captors the satisfaction of thinking they’d beaten us.
How did they survive? “Faith in God, faith in country, faith in your superior officers and your fellow prisoners,” McCain said. “I never felt sorry myself,” Brace said, acknowledging one low point when “I wanted to die…when I survived that, I realized I could make it…I created trips in my head, I even spoke to people sitting next to me [during the imaginary trips].”
McCain said he “loves the Vietnamese people,” although he’d rather not see some of his captors again. Just months after returning home, Brace was again flying missions to Vietnam. “My friends told me I was crazy.” Both men have visited the country several times since their release.
After the Nat Geo event, your blogger found himself alone in the parking lot with McCain. "Do you ever forgive?" I asked. “Oh, sure,” he said, without hesitation. It was a remarkable end to one of the most powerful evenings I’ve spent.

We’ve heard a lot from the ISPs, the FCC and Congressional leaders on the digital divide and various efforts to close it, but what about the towns and municipalities that are affected by it? “The data that