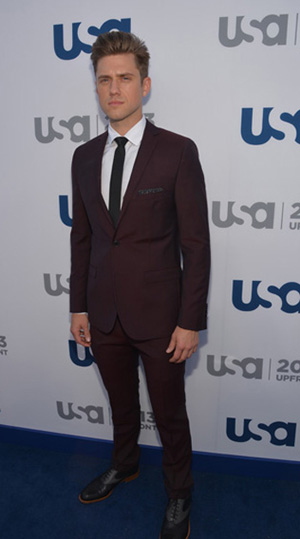 USA Network’s upcoming summer scripted drama “Graceland” (premieres June 6), follows a group of undercover federal agents living together under a single roof, and the struggles that ensue while attempting to maintain a sense of normalcy in their lives. At a pre-upfront press event Thursday, we caught up with lead actor Aaron Tveit, who plays rookie FBI agent Mike Warren. Tveit most recently starred in the film “Les Miserables” as the student revolutionary “Enjolras” and is an accomplished theater actor as well (“Catch Me If You Can,” “Next to Normal,” “Wicked”). Here’s Tveit on what drew him to the role, working with creator Jeff Easton (“White Collar”) and moving to TV from Broadway.

What attracted you to this role?

I really like the character because [with] the other television I’ve done, I didn’t always get to play such great guys. And I really liked how much of a “winning” guy Mike was. He goes about everything in a really smart way. But also, with the little bit at the time that I knew about undercover work, I thought it was going to be very interesting, potentially, to see his goodness being pushed to the limits by the experiences he was going to go through. And that is what happens, especially later in the season. My morality gets tested a lot because I want to do the right thing all the time, but in undercover work, to get to that big goal you have to let all these things go and let all these other bad things happen. People get hurt and [you have to] be ok with it. When you’re undercover with a drug lord, you’re letting these things happen. So at the end of the day, what makes you different from the guy? A lot of moral issues come into question. Also, immediately in the pilot you get a sense of who all the characters are and their relationships.

Your character is sort of set up from the beginning as someone who has to go through a transition. He’s very green.

They say all these things about him—that he’s a brilliant student and the top of his class and he’s obviously very smart. But he doesn’t have the field experience. He kind of gets dropped in a pool and they say “swim.” We just finished the season, and to go back and watch the pilot now from where we finished, there’s a big change that happens—for everyone—but especially my character. He has to grow up very fast.

I’ve only seen the first episode, which obviously deals with a lot of exposition. But other actors in the series have characterized it as “dark.” Would you agree?

It’s dark, but they wanted to make it —at least our work outside of the house—a realistic take on undercover work. Bad stuff happens. It was neat reading the scripts every week. USA was saying they wanted to expand their brand and go outside of what they do, but I have to give them credit. Saying it is one thing, but reading scripts every week and saying, “Wow, that’s really what we’re going to do? Ok great!” They stuck to what they said, which is exciting. It’s great to be a part of that.

How much interaction did the network have with the show?

Obviously they were seeing and watching everything, but they kind of just let us do our thing. It didn’t feel like they were micromanaging. Of course, they were doing their job and [we were] getting network notes and the script had changes, but on set they weren’t really putting pressure on us. They trusted everyone. Also, Jeff Easton, the writer/creator of White Collar, told me this from day 1 he’s very open to us changing our lines. We don’t have to stick to what’s on the page. There’s very much a sense of—in a lot of the group scenes especially—that we really got to bring a lot of ourselves to the characters. It didn’t feel like they were lurking over us. We knew that they were there supporting us, but we got to really do our thing and be left alone.

Will another season of Graceland, if it’s renewed, impede your Broadway career?

I would like to do this more, but we’ll see what happens. The thing is for musicals, for instance, you have to develop them for years and years. So it is hard for me right now to be developing a new musical. But, the nice thing about this schedule personally for me is that even if the show runs for four or five years, we only shoot for about six months, so every year I have about a six-month hiatus where I can come into a play or do a musical, so it does leave those options open for me. I was never trying to jump away from theater. I’m dying to get back on stage.

Public Knowledge and the Benton Institute for Broadband & Society filed an amici curiae brief late last week in the U.S. Court of Appeals for the Second Circuit in support of New York’s Affordable