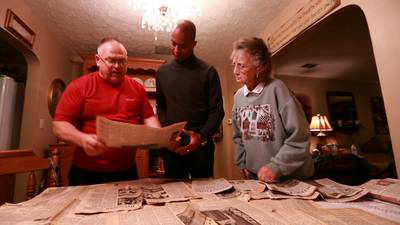 Filmmaker and host of "The Injustice Files" Keith Beauchamp investigates
an unresolved 1968 murder in Martinsville, IN, a "sundown town."

In the fourth installment of Investigation Discovery’s “The Injustice Files,” (premieres Feb 24, 8pm) filmmaker and host Keith Beauchamp explores the phenomenon of American “sundown towns,” or communities that did not allow African Americans to live there—or in some cases even be present—after dark. The special unearths shocking truths about discrimination present in these purposely all-white communities—not the least of which is the fact that they were a largely Northern phenomenon. We spoke to Beauchamp about what it was like traversing these towns, which he believes haven’t altogether abandoned this legacy.
What inspired you to get involved with The Injustice Files?
The Injustice Files was inspired by my previous work investigating unsolved civil rights murders. After the Emmett Till Case was reopened in 2004 (based on my research and film The Untold Story of Emmett Louis Till), the FBI launched their Civil Rights Cold Case Initiative. [It entailed] going back and reviewing cases from the civil rights era, in hopes of bringing closure to families and prosecution to those who evaded justice. It was at this time that I was invited to assist the FBI with this initiative. My job was to use the powerful medium of investigative filmmaking to set up a justice-seeking atmosphere that would allow people to feel comfortable coming forward with information.
In Martinsville, IN, you investigate the 1968 murder of a 21-year-old African-American girl, Carol Jenkins. What was it like to undergo this process in a sundown town?
Well, investigating the murder of Carol Jenkins is somewhat personal. When I first decided to produce a show on the sundown town phenomenon, ‎I was seeking contemporary cases to profile. Unfortunately, many of the cases that I wanted to pursue fell through, because current victims of sundown towns were really afraid to participate.
The case of Carol Jenkins would surface in many conversations and after learning about her family I found out that they were still looking for justice and closure. It was also quite moving to discover that I had a personal connection with the family. One of my relatives married into the Jenkins family and the story of Carol is not foreign to many of my relatives. Coincidence? Things like this just confirm that I’m supposed to do this type of work.
Unlike many cases that I investigated, this case had to be handled differently because I could not just freely walk through town without bringing attention to myself. I found myself sitting in my SUV with tinted windows riding low so that no one would even know I was there. The only family that welcomed me was the Neals, who were the last people to see her alive, besides her murderer or murderers.
The whole time I was in Martinsville, I did not see one African American. To this day, African Americans avoid going through the town all together.
At one point you used hidden cameras. How effective where they? Was there a lot of footage you didn’t—or couldn’t—use?
Regarding the hidden cameras, there were times when I wanted to investigate without showing my face. I understood that it would be difficult for me to get people to talk about sundown towns because of my skin color, so we mic’d and put a hidden camera on my executive producer (who is white) to see if anything in the town changed. It’s interesting what we found out. With every production, it’s always a challenge determining what will make the cut. There’s footage that I hope could be used in the future to help us all get a clear understanding of the sundown town phenomenon.
Did you encounter evidence of curfews still existing in sundown towns?
On this shoot, we did not, officially. There are possibly hundreds of towns that remain sundown towns. Most of the time, curfews were unspoken rules. People of color knew that you had to leave town before dark. These towns currently live by reputation because the 1968 Housing Rights Act makes these towns illegal.
The last time we spoke you said you’d never felt so isolated while in some of these places, and that your crew noticed a change come over you. Can you talk about that a bit?
Well, growing up in the south, I understood segregation and saw racism straight on. But I had never been to a city or town where there was a city ordinance to exclude African Americans from living within the city limits or being in the town after dark. Experiencing it myself was truly overwhelming. I have never felt so out of place or alienated in life. Many of the cities we drove through had very little-to-no African Americans, and to see it with my own eyes, as if it was a natural state of being—I was truly disturbed.
This is a phenomenon many of us know very little about and it had me second-guessing the work of real civil rights in this country. I set out to rule these cities out—and to find that they still exist in Obama’s America was shocking. I will remember this experience for the rest of my life. It is unnatural for people to live this way and think it’s right.
Are you still currently trying to expose sundown towns? How is your progress?
At the moment, I have made a commitment to revisit this subject with Dr. James Lowen, expert of the sundown town phenomenon. He has devoted most of his life outing these towns. Unfortunately, this is a massive undertaking and I will need more time because I’ve only scratched the surface‎.

And now for something different… An RSN that actually snagged a renewal. Comcast and MASN