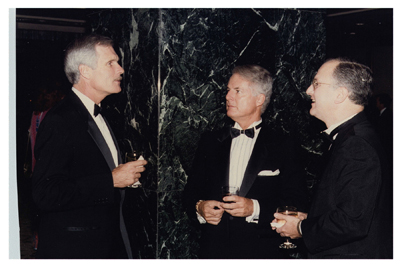 When the industry gathers for the Kaitz Dinner Wed night, it will be the 30th time it has broken bread to raise money for diversity efforts. In honor of the anniversary, here are 25 Kaitz highlights from the past three decades.

–        The Walter Kaitz Foundation, which hosts the dinner, was started to help minorities succeed in the cable industry. It was formed after Walter Kaitz died in 1979. A Russian immigrant, Kaitz was a member of the California State Legislature and then went on to lead the California Cable and Telecommunications Association.

–        CableFAX founder Paul Maxwell and the late Ray Joslin proposed the annual fundraising dinner at a Walter Kaitz Foundation board meeting in the 1980s. “I, wrongly, suggested bouncing from coast to coast each year, but Ray prevailed … and we leaned on NY-based Ralph Baruch to handle (well, Viacom to handle) all the requisite details … Ray and I were ‘honorary’ chairs.  I think we drew about 300 folks,” Maxwell wrote to us in a MaxFax-like email, ellipses and all.
–        Today, the Kaitz dinner routinely draws more than 1,000 attendees.
–        If you don’t like getting dressed up in a tux or an evening gown, you might want to send Leo Hindery a thank-you note. While up on stage one year (seems like it was in the early 2000s), the current managing partner for InterMedia declared he wasn’t coming to the dinner in black tie any more. Everyone else followed his lead.
–        Dinner number four honored Ted Turner, some eight years after his CNN launched.
–        Since the dinner’s creation, it has raised more than $34 million dollars for diversity efforts, including grants to WICT, NAMIC and the Emma Bowen Foundation. That figure does not include this year’s fundraising total.
–        2001 was the only year the dinner was canceled. It fell the same week as the 9/11 terrorist attacks. (If you’re counting, Wed’s dinner is technically the 29th dinner, but Kaitz is counting the 2001 dinner because it was canceled at the very last minute).
–        In 2003, the Kaitz Foundation was reorganized and now operates under the administrative auspices of NCTA.
–        In 2004, the dinner honored Walter Kaitz’s son Spencer, founder of the Walter Kaitz Foundation. "Clearly, we’re not in Kansas anymore.., it’s our destiny to be the world’s most diverse nation,” he told the crowd. "Our new customers are all around us; find them, become them, grow with them."
–        Some years the dinner has more star power than others. In 1998, Natalie Cole took the stage and sang her heart out.
–        Last year, Jennifer Lopez made an appearance at the dinner.
–        There’s just something about the name Lopez. This year’s dinner host is Mario Lopez, host of NUVOtv’s original series “Mario Lopez: One on One.”
–        In 2009, The Kaitz Foundation Dinner left NYC for Denver, part of the industry’s defunct “Cable Connection – Fall” week. The move to the Mile High City didn’t go over well, with attendees dropping to 700 from 1300 the year before and money raised dipping to “more than $1mln” from $1.7mln in NYC in ’08. The diversity groups successfully lobbied for a “Diversity Week” in the fall in NYC, with the industry obliging in 2010.
–        There was a somber tone at the start of the 2011 Kaitz Dinner, with news of Steve Jobs’ death breaking just as the dinner was getting underway. While no one mentioned it on stage, there was a glow from iPhones and Blackberries among the tables at the Hilton ballroom as word spread.
–        Here’s a random nugget… Louis Gossett Jr was the master of Ceremonies for the 1991 dinner. The honoree was Sidney Topol of Scientific-Atlanta.
–        In 2000, the dinner honoree was Adelphia founder John Rigas, who is now serving a 12-year prison sentence after being convicted in ’04 of conspiracy and fraud charges that led to the collapse of what was the nation’s 5th-largest cable company. His son Tim Rigas is serving a 17-year sentence. Neither man admits wrongdoing.
–        In 2005, the event moved from having a dinner honoree to a Diversity Champion (or Champions) and Diversity Advocate. That year, Time Warner Cable’s Glenn Britt was honored along with Cox’s James Hatcher and Sherryl Love. Rep Melvin Watt (D-NC) was the first Diversity Advocate honoree.
–        The following year, the Diversity Champion was awarded to recognize companies as a whole, with MTV Networks honored.
–        This year’s dinner will recognize Sony Pictures Entertainment with the Diversity Champion Award. In ’09, SPE created the Spectrum program to redouble efforts to increase diversity and inclusion. The League of United Latin American Citizens will receive the Diversity Advocate designation.
–        The 2013 Kaitz Dinner co-chairs are Comcast Cable pres/CEO Neil Smit and Viacom pres/CEO Philippe Dauman.
–        Other past honorees include Bill Daniels (’86) and Jim Robbins of Cox (’97), both no longer with us.
–        Sometimes the after party can be almost as much fun as the dinner. This year’s shindig features Chaka Khan, KeKe Wyatt, Chante Moore and Celebrity DJ D-Nice.
–        Speaking of after parties, the Righa Royal Hotel bar was the unofficial venue for years. It’s been replaced by The London. Another popular place for after-dinner drinks—Don’t Tell Mama—is still swinging. Partymeister Chuck Klein held an after party at the club for 10 years.
–        Got your tickets? See you there!

Seth Arenstein reviews the week’s top hits, including “30 for 30: Once Upon a Time in Queens.”