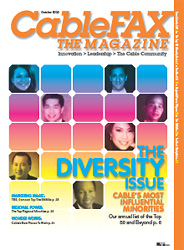 At this time last year the country was gearing up for a presidential election that some thought would change the country radically. A few of us at CableFAX wondered about this, so in the diversity magazine published last year we asked a panel of cable executives whether the prospect of an Obama presidency would “reduce the urgency of cable diversity initiatives and organizations, like NAMIC?”

We thought it was a good question. Now we realize it was not.

Our panelists agreed on a verdict: “Absolutely not,” NAMIC chief Kathy Johnson retorted. “Organizations like NAMIC…that foster workforce diversity and inclusion will continue to be a necessity no matter who is in the White House.”

Lower down in our interview panelists mentioned an issue that was gaining attention, but had not yet risen to the top of the national agenda. Asked to name “the biggest threat to diversity in the workplace,” our panel was prescient. “Certainly the economy is an issue and the availability of jobs,” Showtime EVP of HR Raymond Gutierrez said. Johnson added that an economic slowdown “adversely affects the number of employment opportunities for professionals of color at every level, but particularly at the senior level.” Panelist Adria Alpert-Romm, Discovery’s HR chief, also was concerned with economics. Diversity can slip when job openings are scarce, she said. Well, as we know, jobs are scarce. Despite signs of recovery, national unemployment has reached 10% as I write this message late in September.

Another byproduct of the slow economy was the decision to terminate Cable Positive, a group to whom diversity was sacred.

Clearly then, this is an important time to emphasize diversity. We hope our magazine and our joint breakfast with NAMIC in Denver on Oct. 27 to honor the executives written about in these pages help.

View the electronic edition of CableFAX: The Magazine‘s 2008 Most Influential Minorities in Cable.

2009 Most Influential Minorities in Cable

Also in This Issue: