Black History Month began this year with a unique historical footnote, just 12 days after the first black president in American history left office after eight years—and with the eloquence of his farewell speech still ringing in many people’s ears.

President Barack Obama’s legacy and defining moments will be examined for decades to come, and the power of his most memorable speeches will be explored in a new hour-long Smithsonian Channel special, “The Obama Years: the Power of Words,” premiering February 27 at 8 p.m. ET/PT. It takes viewers through significant moments of his political career via six notable speeches and how they shaped the national dialogue at crucial moments.

But Smithsonian Channel also is taking the show on the road with special screenings followed by panel discussions across the country, starting with a premiere event at the National Museum of American History in DC Tuesday night. In partnership with Comcast, Altice and Charter Spectrum, live events for “The Obama Years: the Power of Words” will be held in nearly a dozen cities including Baltimore, Philadelphia, Houston, Seattle and Pittsburgh throughout the month, mainly in museums focused on or with a strong connection to black history. This will be the fifth year the channel has taken Black History Month content to live audiences. 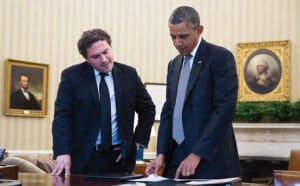 President Obama and speechwriting director Cody Keenan review a speech in Smithonian Channel’s ‘The Obama Years: the Power of Words.’

At the doc’s DC screening and panel discussion this week, producer/writer/director Jody Schiliro talked about how she’s always been interested in the way the White House works. Her previous work includes “The President’s Photographer: Fifty Years Inside the Oval Office.” “I thought this film would be an interesting look behind the scenes of speechwriting,” Schiliro said. “I was surprised at how involved the president was in his speechwriting process.” Obama’s director of speechwriting Cody Keenan backed that up, telling the screening audience that Obama always was the chief speechwriter. That put the pressure on him. “He’s so good at it that you want to kill yourself on that first draft… to make it great because you want to live up to his expectations and impress him,” Keenan said. “But also because you don’t know what he’s been going through that day with work and you don’t want to create more work for him.”

The documentary exemplifies Smithsonian Channel’s goal to create engaging, high-quality content—and this one could not be more timely. “We’ve really found ourselves with terrific shows that highlight different parts of history that happen to be African American history. We want to get the word out that this is content that is not only inspiring but entertaining, and the kind of content you can expect from Smithsonian Channel,” said Janice Janik, svp sales & affiliate marketing at Smithsonian Networks. “It seems to be a really great synergy to screen it in local communities, and connect the dots between the [Smithsonian] institution, the channel and our distributors who deliver it into people’s homes.”

BET’s big, splashy programming initiative for Black History Month is the three-part miniseries “Madiba,” starring Laurence Fishburne as Nelson Mandela. Based on two biographies of the South African leader and Nobel Peace Prize winner, the series was shot in South Africa and aims to tell the definitive story of Mandela’s life, his struggles against apartheid and ultimate victories. The first episode aired February 1 with successive installments scheduled February 8 and 15 at 9 p.m. ET/PT. 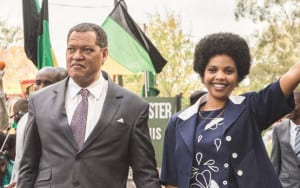 “Nelson Mandela’s journey of political activism and leadership is truly inspirational, especially in these times. We are proud to bring this triumphant story to audiences of all ages through our original miniseries ‘Madiba,’ the cornerstone of our Black History Month programming,” said Stephen Hill, president of programming, BET Networks “This six-hour miniseries is part of BET’s continued commitment to break new ground in long-form programming and tell our stories authentically like no other network can.”

In addition to revealing Mandela’s innermost thoughts and his bold organizing techniques, the miniseries also shines a light on lesser-known men and women who played a big part alongside him in the quest for freedom and equality in the African nation.

To honor Black History Month, History is airing an encore presentation of “Roots,” its four-night miniseries which originally premiered over the 2016 Memorial Day weekend and garnered large ratings. Based on Alex Haley’s 1976 novel, and the remake of the hugely successful 1977 ABC miniseries, it reimagines the history of slavery through the multi-generational lens of the family of Kunta Kinte, portrayed by Malachi Kirby.

“The story of ‘Roots’ is timeless, powerful and incredibly important. We are proud to bring this epic family saga back in commemoration of Black History Month,” said History president/gm Jana Bennett. “Roots’ reflects so many of the characteristics we honor during Black History Month—bravery in the face of inequality, belief in the possibilities of freedom and the ultimate resilience of the human spirit. Forty years after the original series shook the world, we are proud to present a reimagined vision of this incredible family saga. A new generation of viewers can now understand how and why the story of Kunta Kinte and his family is relevant, timely, and urgent in 2017 just as it was in 1977.”

“Roots” episodes 1 and 2 will air on February 12 from 8 pm-midnight and episodes 3 and 4 will run on February 13 during the same time slot.

TV One, home of the 48th annual NAACP Image Awards airing live February 11, is rolling out a campaign throughout the month called “Creators of Cool.” It celebrates African American culture and its contributions to the world at large from civil rights to sports, music and entertainment. Included are new episodes of its signature series “Unsung,” special segments on the daily newscast “News-One Now” and the premiere of the original movie “Media,” starring Penny Johnson Jerald as the matriarch of a family who runs a media empire. The network also will showcase documentary premieres of “Soul Food Junkies” and “You Belong to Me: Sex, Race and Murder in the South” and the premiere of the Kenny Leon-directed film “The Watsons Go To Birmingham.”

“TV One is excited to celebrate Black History Month through a variety of shows, specials and documentaries that will shine a light on the African American experience,” said Brad Siegel, network president. “What would the world be without the ‘Creators of Cool’? From the leaders of the Civil Rights Movement to the inventors and artists that used their gifts to make the world better, we salute these visionaries—past, present and future.” 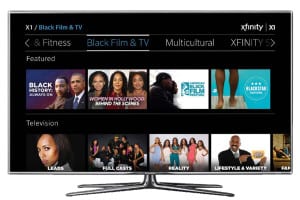 Through its Xfinity platform, Comcast launched several large initiatives for the month, including two new collections—“Black History Always On” and “Black Women Behind the Scenes.” “For us, it’s about making sure positive educational programming is always available year round for our customers to consume,” said Keesha Boyd, Comcast’s executive director of multicultural products.

Within “Black History Always On,” viewers will find feature films ranging from “The Gabby Douglas Story” to “Red Tails” and “42” to documentaries about the civil rights movement. “Black  Women Behind the Scenes” encompasses about 20 four-five minute vignettes focusing on below-the-line women working in the entertainment industry.

“It’s almost like a master class, watching these women tell their stories—with the help of some men as well,” Boyd said.

And that’s not all. Comcast just announced a partnership with two film festivals, the American Black Film Festival and the Black Star Film Festival from which to license new content—including shorts and web series—and investing in the black filmmaking community.

Meanwhile, fans of classic films starring two of the most acclaimed black actors in history will want to check out HDNET Movies, the network and VOD service founded by Mark Cuban in 2003.  On February 28, it airs “The A-List: Sidney Poitier and Denzel Washington,” a nine-hour programming block beginning at 7pm ET featuring some of their most significant films including “The Mighty Quinn,” “John Q,” “The Defiant Ones,” “Lilies of the Field” and “Pressure Point.”

“Few actors have had an impact on cinema quite like Sidney Poitier and Denzel Washington. As the first African American winner of the Best Actor Oscar in 1963 for ‘Lilies of the Field,’ Poitier broke down tremendous racial barriers in the film industry. He paved the way for actors like Washington to make their own mark and in 2002, 39 years after Poitier’s historic win, Washington also took home the Best Actor award,” said HDNET Movies gm Rachael Weaver. “We are proud to celebrate these two trailblazers in honor of Black History Month, and as part of our tribute to this year’s Academy Awards, giving viewers a unique opportunity to experience some of their most defining performances.”