A year has come and gone and it’s time again to celebrate Black History Month. It comes at a time when the cultural climate opens fissures and creates divides amongst neighbors. This year’s programming looks to serve as a reminder that these divides need not last forever, that the human race is far stronger banded together than it could ever be apart. Whether through revisitations of the conflict resolutions of the past or the acknowledgment of today’s issues, this year’s Black History Month could be a bridge built in closing the gap built by racially-charged issues.

“Black History Month, like other months dedicated to gender, race and culture, is an example of how we embrace and celebrate the rich cultural heritage of our country,” said Eglon Simons, pres/CEO of NAMIC, an association that educates and advocates for multi-ethnic diversity in the communications industry. “It is important to dedicate this time to acknowledging the history, contributions, lives and futures of our underrepresented fellow citizens and to sharing the diversity of our communities.” 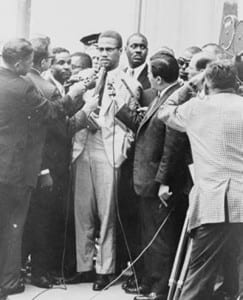 Forever honoring what has come before, Smithsonian Channel is revisiting one of the key figures behind the civil rights movement with “The Lost Tapes: Malcolm X,” premiering Feb 26 at 8pm. Rather than bringing together historians and experts to discuss his contributions to the movement, the documentary is told entirely in Malcolm’s voice through the compiling of speeches, audio tapes, newscasts and archival footage.

“When you come to ‘The Lost Tapes: Malcolm X,’ you’re taken back in time and you are hearing from the people who were there at that time,” said Smithsonian’s David Royle, evp, programming and production. “You’re hearing Malcolm X’s own words. You’re not hearing how to interpret them. You’re being left to decide for yourself, and I think people really respond to that as an audience.”

While the name “Malcolm X” may be one of the more well-known from the period, there still lies plenty of room for hyperbole and misinformation in the telling of his story. The Smithsonian special is looking to combat that. “The assumption about Malcolm X is very much caricature,” Royle said. “In many ways, he’s been overshadowed or constantly compared with Martin Luther King, a giant in his own right. If you watch this film, you see his eloquence. You also see his evolution and growth as an individual, and his dignity. It’s that idea that you look at something where you go into it thinking you know who the person is, and you hopefully come out realizing they’re much more nuanced and complex.”

Just as the network did last year with “The Obama Years: the Power of Words,” Smithsonian is celebrating the release of The Lost Tapes with special screening events and discussions across the US, with the premiere held at the National Museum for African American History and Culture in partnership with Comcast in DC Wednesday night. Attendees heard from producer Tom Jennings and Ilyasah Shabazz, Malcolm X’s daughter and a social activist in her own right.

Although this special is a centerpiece offering to celebrate Black History Month, the stories that remain untold are a year-round focus of the network. February brings an enhanced focus to them, but there’s a long way to go before all peoples see themselves reflected on the screen.

“It is absolutely vital for our industry to have a diversity of voices, and I don’t think any of us have done enough yet to achieve that,” Royle said. “It is an ongoing important issue, and when you don’t have enough diversity of voices, you don’t tell the full story. You look at the Smithsonian with a recognition that this area of history has not been fully and completely told. It needed to be shared and it needed to be explored with more care and detail and nuance, and that’s what we’re now trying to do as a channel.” 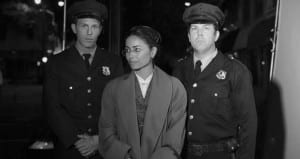 The hours leading to the Montgomery Bus Boycott are chronicled in TV One’s ‘Behind the Movement.’

Smithsonian’s not the only channel looking to unearth the history that’s remained untouched for far too long. TV One’s “Behind the Movement,” may find its foundation in the story of Rosa Parks, but the true value in the film is in its highlighting of lesser-known supporters of the Montgomery bus boycott.

“This movie not only honors Rosa Parks and her courageous act, it also honors and informs and educates and reveals some of the unsung heroes who participated in this watershed moment in the civil rights struggle,” TV One interim gm Michelle Rice said. “It really will show you the inner workings of the movement that led to the boycott.”

One activist in particular struck a chord with Rice: Jo Ann Robinson (played by Loretta Devine). President of the Women’s Political Council and a professor at Alabama State College, Robinson and others spent an entire night working to distribute more than 50,000 flyers overnight to spread word of the boycott.

“Without a hidden figure like Robinson, who most of us would not know about other than from this movie, the boycott may not have evolved,” Rice said. “These people are responsible for sparking the beginning of the civil rights movement. I can’t wait for my kids to see this version and really have a deeper understanding that, sometimes, it’s the people behind the scenes, the unsung heroes, who really create history.”

“Behind the Movement” is just one piece of a larger programming event for TV One. Under its “Represent the Dream” theme, the network looks to boost awareness of the need for unity, pride and action in a pivotal election year. A short form video campaign will air throughout the month featuring rapper Common discussing issues affecting the African American community. TV One hopes its programming sparks conversation on social justice in the black community while celebrating the contributions of African Americans throughout the world. First to take a swing at this was the limited series “Two Sides” (Jan 22 premiere), which examined the facts surrounding four victims of police violence that made national news.

“People think that we can’t get along, but we have more things in common that should bring us together than differences that should tear us apart, and we need to stop focusing on those things and work together for a common goal,” Rice explained.

Contemporary issues in the African American community are also at the heart of programming on digital multicast network Bounce. After taking a moment to celebrate the achievements and contributions of African Americans on Feb 11 with the Bounce Trumpet Awards, a special installment of newsmagazine show “Ed Gordon” will premiere on Feb 17 called “Am I Black Enough?”. It brings together influencers from all walks of life including Wayne Brady and Misty Copeland to discuss the intricacies of cultural identity within the black community. The special will stream ahead of its linear premiere exclusively on Bounce’s SVOD service Brown Sugar beginning Feb 12.

“It is important as the country focuses on the contributions of African Americans to the advancement of civilization, that we participate in a significant and meaningful manner,” Bounce co-founder and civil rights icon Andrew Young said. “I strongly encourage people of all ethnicities to watch Bounce all year, but particularly in February.”

Giving these stories a platform to be heard and understood is integral to A+E Networks’ approach to programming across its portfolio. While Lifetime will dive headfirst into the life of Olympic gold medal-winning gymnast Simone Biles with “The Simone Biles Story” and “Biography Presents: Simone Biles: American Gold,” History’s content plan focuses on shedding light to the little-known details behind African American contributions in war in “A Distant Shore: African Americans of D-Day.” Other History content delves into the untold facts behind the civil rights movement and includes an encore of last year’s “The 44th President: In His Own Words.”

A+E’s digital platform Biography views Black History Month as one of its most important initiatives, collaborating with the National Museum of African American History and Culture. The partnership includes a series of articles featuring black history figures, including Shirley Chisholm and Booker T. Washington.

“Our editorial goal is to expand people’s perspectives about black history and illuminate the stories of prominent and lesser-known black history figures as part of our American story,” said Tiffanie Dark, History, Biography, A&E Editor In Chief. “Our collaboration with the National Museum of African American History and Culture is aimed at sharing the biographies of important African American history makers and how objects from the museum’s expansive collection reveal fascinating aspects of their lives and the important contributions they have made to the collective story of our nation.”

Revisiting the past and finding new ways of presenting the stories is the key to introducing audiences to the content that remains important today. SundanceTV is doing just that with a remastered version of the miniseries “Roots,” coming to the net Feb 10 at 12pm. It will also use the month to air the second and third installments of the iconic series, along with “Queen,” the conclusion to the story. 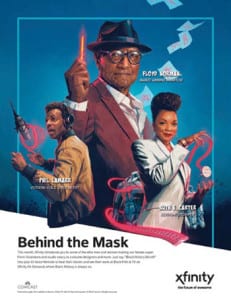 Look for MVPDs to highlight all programmers have to offer for February. Comcast is also striking out on its own with “Groundbreakers: Superheroes Behind the Mask,” a campaign that includes an original short, print ad and commercial spot. The effort shines a bright light on African Americans working in top positions through the genres of sci-fi, animation, fantasy and comic books, genres popular in the African American community despite sparse representation. Exclusive VOD content features Phillip Boutte, Jr., costume illustrator and concept artist for such films as “Justice League,” and “Black Panther,” and Cheo Hodari Coker, creator of the popular “Luke Cage” series on Netflix.

Continuing the theme of programmers and curators alike, Starz Encore Black will marry together films fronted by prominent African American actors of the past and the present. Eddie Murphy, Samuel L. Jackson, Wesley Snipes and Ice Cube will be honored with programming blocks along with sports legends like Jackie Robinson and the Williams sisters. The month will be rounded out with a birthday tribute to the legendary Sidney Poitier starting on Feb 20 at 4pm.

No matter what stories viewers gravitate towards this month, the goal is clear: encouraging a togetherness that has fallen to the wayside.

“Part of understanding each other is about seeing that black people are not monolithic,” Rice said. “We have the same hopes, dreams, as everyone else. Sharing our stories, sharing our hopes and dreams, we hope it will inspire and inform some people and create more harmony.”