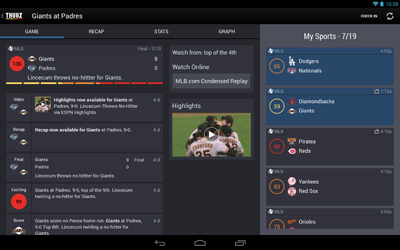 Live sports content is often referred to as the last appointment viewing. So when it comes to second screen sports apps, a concern for some content providers is whether they distract from live, linear content. To be sure, the balance is a tricky one. Enter Thuuz Sports, which has an app that’s designed to “measure the excitement level of sports events in real time,” according to CEO Warren Packard, with the end goal of driving tune-in to live sports events.

The app has been in business for a couple years but was recently optimized for Android tablets—just in time for football season. It now includes a Fantasy integration as well. You can get alerts about exciting live games, with your favorite teams or Fantasy player picks, and customize the frequency of the alerts to your particular level of fandom. And, you can look up what channel the game is on.
So how does one actually measure excitement? Thuuz uses an algorithm. “The challenge that we solve, is to measure excitement of every play of every game and every player… There’s a lot of mathematics behind that, to do a good job and to also personalize that for each individual’s tastes,” Packard told me in a phone interview last week.
A lot of it has to do with score, as you might expect. But that’s just part of it. When you take a sport like soccer, there are exciting games that are 1-0 and truly boring ones that are blowouts. What Thuuz aims to alert people about are “exciting and edge-of-your-seat games versus ones where you want to change the channel,” said Packard.
Let’s stick with soccer as an example. Thuuz uses five criteria to measure the excitement. First, there is the pace of the action, which ideally will approximate the game’s energy level. Second, the score. With a sport like basketball, the score is often an indicator of the game’s excitement, but it’s only a factor with soccer. Third, there’s the novelty of the athletes—their performances, and the statistical analysis surrounding that. “We’re looking for things that are rare, and rare things lead to interest and novelty,” Packard said. Fourth is momentum shifts, which are “key in a sport where there’s not a lot of scoring.” That means paying attention to shots on goal, set plays, etc. Lastly, there’s the context. Is there a rivalry between teams? Is it a playoff game? Do the coaches hate each other? They also look at twitter and pay attention to spikes in tweets.
“All these combine into a score rating that’s personalized for the individual,” Packard told me. He added that they’re hyper-focused on not “over-communicating” with the alerts. The goal is to provide “the least invasive service as possible while adding the most value.” According to the company’s user surveys, nearly 70% of its user base say they watch more live sports as a result of the app.
Thuuz already has a line up of partners in the industry. DISH’s “Game Finder” on its set-top box is powered by Thuuz, and it’s also integrated into the DBS op’s tablet app. On TiVo, Thuuz powers its “What to Watch” sports feature. When I spoke to him last week, he had just landed from IBC2013 in Amsterdam and solidified a partnership with Liberty Global. In the coming weeks, it’s launching in the company’s Netherlands operation. Shortly after will come mobile app integration, he said.
Packard raises a valid point: “The biggest expense that MVPDs pay is for the sports content. And they need to make that work,” he said. It’s true that customers have more and more choices out there, so an app that specifically drives consumers to live TV could be a useful retention tool. One just needs to look at the timing of the resolution to the TWC/CBS dispute—right before the NFL season started—to confirm the value of live games, Packard rightly noted. “Distributors need to have a point of leverage, and the point of leverage is sports.”

AT&T pinpointed a more exact closing date for the WarnerMedia-Discovery transaction, saying it looks likely to close in 2Q22.