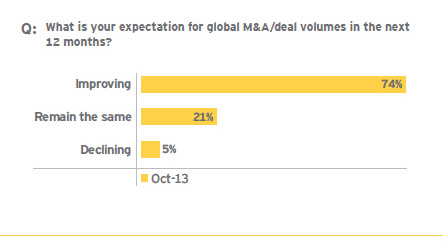 If the daily rumbles of potential MSO merger partners didn’t clue you in, EY’s 9th “Capital Confidence Barometer” report on media & entertainment should crystalize it: confidence in the sector is up and conditions for M&A are improving.

While 74% of M&E execs surveyed expect deal volumes to improve, the sector has one of the lowest levels of acquisition expectations among other sectors EY surveyed. It ranks 2nd from the bottom in EY’s rankings of sectors with a propensity to do a deal in the next 12 months. Still, EY media and entertainment adviser Tom Connolly saw a level optimism in this year’s survey that has been lacking in years past. “The uncertainty is not one that is causing companies to pause. There is more of an aggressive feeling that I’m so happy to see because it does reflect higher confidence and optimism even though there are a number of things out there that cause uncertainty,” he said. “The uncertainty is manageable.”

Bolstering M&A talk is hopefulness for the economy, with more than two-thirds of execs surveyed saying they believe it is improving. That’s up from 26% a year ago. Those who see the economy declining fell to 9%, the lowest level seen in EY’s three most recent surveys. The biggest risk reported was political instability, cited by nearly half of respondents. The survey was conducted in Sept with a panel of 56 media and entertainment execs from every global region (48% were CEO, CFO and other C-level execs).

Consolidation is a key theme, with greater leverage available. Confidence in credit availability at the global level rose to 85% from 55% a year ago in the survey. “There have been these one-off large transactions (such as Comcast-NBCU), and I wouldn’t be surprised to see more [transactions] rather than the one-offs,” Connolly said. “You want to reach for growth in a modest growth environment, where the economy is expected to grow between 1-3% according to the executives in the report. You want to grow faster than that.”

But it’s not all about deals. Media and entertainment execs with excess cash today would largely prefer to return it to shareholders through debt repurchases, dividends or stock buybacks. Only 37% expect to use cash to fund growth investments over the next 12 months. “I wouldn’t want to paint this too rosy,” Connolly warned. “What I’m really sensing is that over the next few years, there is going to be a lot of good things happening on the business front. It’s just different than the last report, which I find very encouraging,” he said, explaining that political and banking concerns remain, but that there is less fear. “It’s nice to see optimism re-emerge.”

Fox Business Network ’s Larry Kudlow will host a special tax edition of “Kudlow” on Monday at 4pm ET on the network. Titled “Kudlow: Taxed to the Max,” the special will focus on tax policies coming