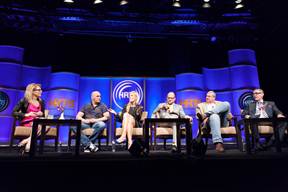 Top reality TV producers told an HRTS audience Wed in Beverly Hills that coping with talent ain’t for the squeamish. Pilgrim Studios pres/CEO Craig Piligian admitted that “you have to do crazy stuff to keep the talent in line,” including recasting roles if it comes to that—and “you have to have a backup plan” when they go rogue. Deirdre Gurney, owner of Gurney Productions of A&E’s “Duck Dynasty” fame, said it’s understandably difficult for people plucked out of obscurity to stay grounded as they start getting famous. “They need to be who they were the season before, and their lives have completely changed,” she said, noting that the sudden flurry of opportunities for appearance fees, endorsements and other trappings can be overwhelming—and somewhat disorienting. “It’s easy for them to forget that the show is what leads to all of these other things,” she said.

Eli Holzman, pres of All3Media America, said it’s about good faith and building trust—even though that can be a rare commodity in Hollywood. “You can screw them before they screw you,” he said. “But then the minute the pendulum swings back, they’re screwing you—which is the current model.” Philip Segal, CEO and executive producer at Original Productions, said most of these issues work themselves out by the 4th or 5th season—but it’s those early stages as the show and its characters are blowing up—that test everyone’s wills. “You have to get to a certain trust point… but getting there can be very, very difficult,” he said. “At a certain point, the economics won’t work.”
Gurney said a combination of articles trumpeting the show’s ratings, agent/manager influence, discussions among the cast, etc… all work to fire up talent and create a perception that they’re not being treated fairly. “That’s the problem,” she said. “The numbers get so big, and they feel cheated.” Segal said some problems could be avoided if production companies and networks offered better deals to reality talent in the 1st season. But he said it will always be difficult to keep reality stars happy with their original deals when they see themselves on magazine covers and on Times Square billboards. “It goes back to that billboard,” he said. “When a show is successful and it goes off the chart, you’re going to have problems.”
In addition to talent headaches, producers said the business itself remains exciting and dynamic. “I like staying independent,” said Craig Piligian, who might have set an HRTS f-bomb record during the panel. “It makes you fight a little bit harder… I’ve hired a lot of smart f—king people, and they work really, really hard.” And as for those critics of reality TV who argue that it steals space from worthy scripted fare, Piligian has a typically diplomatic response: “F—k ‘em,” he said. “Unscripted is much harder to do than scripted.” So there…