With Ovation premiering British import “Young Doctor’s Notebook” tonight, CableFAX’s Michael Grebb grabbed some time with star Jon Hamm to chat about this somewhat eclectic turn for the A-list actor. Hamm co-stars as an older version of Daniel Radcliffe’s (Harry Potter) young doctor character and often finds himself in the same scenes with Radcliffe, even though they live in different time periods. Based on a novel by Mikhail Bulgakov, Young Doctor is a darkly comic and often gory journey into a rural Russian hospital, circa 1917, complete with morphine addiction—so, uh… “Mad Men” it is not. CableFAX was one of 4 outlets who sat down for a roundtable with Hamm in L.A. last week. The following edited exchange stems from CableFAX’s questions to the award-winning actor.
You have a producer credit. And it sounds like you were a fan of the book and became a big force behind this project. What’s the genesis of how this got made?
I should probably disabuse people of that notion. That gives me a lot more credit than I probably deserve. I was over in the U.K. working on [IFC’s] “The Increasingly Poor Decisions of Todd Margaret” with [producer] Clelia Mountford… She sent me the book, along with a couple other things. The other things I didn’t really respond to, but I read the book and I thought, “Well, this isn’t a world that I see very often.” It’s a world that I find incredibly rich, and the tone of the book is similar to the tone of the show. It’s darkly comic. It’s very explicit in its gore. A lot of that stuff is in the book—pulling the dude’s jaw out, etc. It’s very medically realistic for the turn of the century in nowheresville Russia. I just thought it would be fun… And I said “Do you think we could get Daniel Radcliffe because he’s the biggest star in the world and kind of perfect for this?”… I had just met him at the BAFTAs. This is before we even had a project to pitch. So I thought well, if somebody could get me in a room with him I could at least pitch it. And as it turns out, he’s a massive, massive Bulgakov fan. 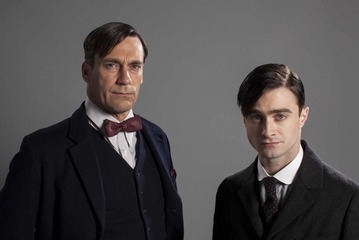 So the idea is that these scenes in the hospital are how the older doctor remembers the events as he’s reading through his notebook? Is that the basic conceit that allows you to interact with your younger self?

Everyone was like “How are you and Dan Radcliffe playing the same version of the same character?” And I’m like, “Well, it’s his imagination of when he was younger, and when you’re younger, you think of yourself as shorter?”  I don’t know.
Good answer.
[Laughs] Bulgakov’s work is this sort of fantastical or magical realism… It’s an oxymoron, but his work exists in that weird nether-space that is not quite real and not quite fake. And the dude [doctor] was also doing a shitload of morphine, so his memories probably not that great. At least he can read his own writing.
What was it specifically about the book that attracted you to this role? You tend to play dark characters with dark sides.
Mostly it was just that I hadn’t seen anything like this in a long time. I mean, Doctor Zhivago is the closest thing you could look at—and only in the world. Tonally it’s radically different. But I thought it was a rich environment to set a story in, and that’s interesting to me, you know?… The good part of being an actor is to do different things. The weird thing is that once you have success doing one thing, people want you to continue doing that one thing. So you really have to fight against the tide and to try to get to do different things. Fortunately, Master Radcliffe and myself have the ability to choose the things we get to do… I look at people whose careers I like—whether it’s Clooney or Matt Damon or Michael Douglas—they all make these interesting choices, and God bless ‘em. That’s why we like them.
You mentioned that you and Daniel didn’t know each other well before this. So what was your process working together on the set?
He’s a tremendously pleasant young man, and he’s wildly intelligent. He’s a super hard worker. We just finished shooting the second season, and we were shooting while he was doing a full-length play on the West End. So we would wrap at five o’clock, and he would get in a car and drive to the West End and do a show. I was like, “Dude, how old are you? Because when I was your age, I was not working that hard.” It’s impressive. And he is impressive, and wildly so. So he set a very high bar, and I happily met him there. Believe me, on “Mad Men” I’m used to working very hard and setting the example. So I was very pleased that I got to work with this young actor who doesn’t have to work this hard. Honestly, he can take a few decades off if he wants to. But he doesn’t because he has a tremendous amount of pride not only in his work but in how he presents himself to people. And that’s inspiring.
This is completely different than “Mad Men,” but one similarity is that it isn’t set in the present day. Do you approach anything differently when a project is historical in nature?
I think you approach it fundamentally in the same way. You want to tell the truth of the story and the truth of the character. You want to bring that across as best as you can. And then the rest of it is your job. Other people’s job too. The design of it and the look of it goes a long way toward transporting you into that world. I mean, look at “Mad Men.” Many people think it sort of sparked a revolution in mid-century design. And people are like, “Whoa. We forgot how cool that shit was.” I don’t think [Young Doctor’s Notebook] is necessarily going to spark a return to early 20th century Russian design—but it was really cool. When we got to do all the costumes and stuff with the art department on the show, the budget of this was not very big. But it looks amazing.