Meshed transport and redundant storage were some of the flavors in Time Warner Cable techno twofer in Portland, Maine. Near the end of 2004, Time Warner Cable’s New England division realized it had outgrown its legacy video on demand (VOD) system that was first introduced in 2002. At the same time it was replacing its VOD platform, TWC New England also embarked upon a path to simultaneously migrate to a 10 Gigabit Ethernet (GigE) transport network around its major sites. The division wanted to find a solution that scaled to serve additional streams to meet increased VOD demands and one that could also scale content cheaply; both without taking down the system or causing outages. Another goal was to have the platform support new on-demand services such as TWC’s StartOver, which allows customers to restart a show or program at the beginning. `Any to any’ streaming TWC choose Arroyo’s OnDemand to work in conjunction with installed components such as Scientific-Atlanta’s set-top boxes, Time Warner’s ISA architecture and Tandberg’s OpenStream business management system. Chris Graviss, the VP of Engineering in the New England division, said the project started in March of last year and was finished by December. One of the goals was to have all of the video servers be GigE connected through this new network and to adopt architecture that allowed “any-to-any” streaming across the GigE backbone. (See Figure 1.) 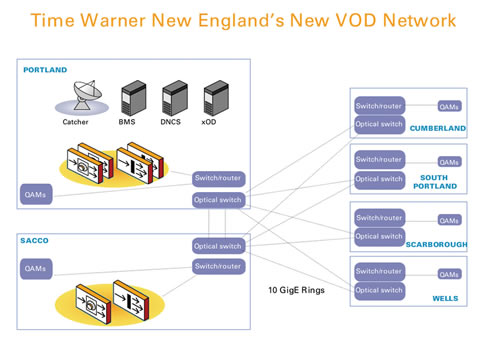 “We really wanted to do an `any content to any subscriber platform,’ and the system put forth by Arroyo really led us down that path,’ Graviss said. “At the same time, we wanted to do a new layer 1 transport platform in the Portland area for the New England division. They (GigE transport and the new VOD platform) kind of went hand in hand, and we really tried to couple the two systems together.” Vault to vault Arroyo OnDemand is a network-based solution for the requirements to ingest, store, distribute and personalize VOD programs. It’s deployed on industry-standard computers, which then become nodes on the video server network as each performs one piece of the overall workload. Working with Tandberg’s OpenStream, Arroyo OnDemand’s Vault Array, which consists of one vault server in Portland, Maine, and another in Saco, Maine, receives VOD content from the catcher at Portland and ingests and stores the content. One copy is stored in the vault server at Portland, and a second copy, required for resiliency, is instantaneously mirrored in the server in Saco. Each Vault server can store up to 4,700 hours of MPEG-2 SD content. “One of the aspects we really utilized based on our GigE meshed architecture that we built in Portland was our ability to have redundancy in our VOD platform,” Graviss said. “We actually run a decentralized server streamer and content vaults that allow us full redundancy in case of a fail based on site locations or other stuff we can’t control.” Under normal operations, the Portland streamer will retrieve content from the Portland vault server, and likewise at Saco. But if its local vault is not available, either streamer will access the remote vault over the metro network. Also, in normal operations, the Saco streamer serves service groups in the Saco area, while the Portland Streamer serves service groups located in the Portland area. However, any streamer can stream to any service group, if required. Once the new streamer is auto-discovered by the network, it begins servicing requests as part of the total pool of streaming capacity in the network. Streamers Streams are served from the streamer array, which TWC New England configured to be physically distributed between Portland and Saco, yet operates as a single logical streamer. Each of the deployed streamers has a capacity of 2,500 streams, which is more than enough to meet Time Warner New England’s current requirement of approximately 3,000 streams. “At this point, we basically have 3,000 protected streams with the capability of going to 6,000 streams in an unprotected environment, which means if we lose facilities based on enviromentals, or anything like that, the customer won’t see that failure,” Graviss said. “Arroyo is a nonproprietary-based platform, which gives us the ability to manage the system. Say our region base is capable of 6,000 streams—then it’s really up to us whether we deploy 4,000 in Albany and the other 2,000 somewhere else.” The vaults and streamers are connected via the GigE links. Each vault server stores a full copy of the 2,400 hours of VOD content available in the Time Warner New England library, and each streamer has a cache of approximately 500 hours of the most popular hours of content in the library. “The biggest challenges that we had were on content propagation because of the new arrays,” Graviss said. “Being in a different format meant we had to catch a lot of the content new.” Backup TWC New England sent one of its vaults to Wilmington, NC, which is another location that has gone to the Arroyo platform, prior to going live to recapture some lost data. Just recently, Albany made the decision to use the Arroyo platform, so TWC New England sent its storage vaults to Albany, which were replicating data within 36 hours. “That’s where we really see the synergies from a regional standpoint,” Graviss said. “We’ll potentially be able to back each other up across the regional networks that are deployed and also have failovers from a regional standpoint and not just a divisional standpoint.” —Mike Robuck This was adapted from an article that first appeared in CT’s Voice Report. To subscribe, visit our Web site: www.ct-magazine.com

WICT announced its 2021 Women of the Year and Women to Watch honorees Friday, acknowledging the individuals embodying WICT’s mission to transform the industry through female leadership. Noopur Davis , evp