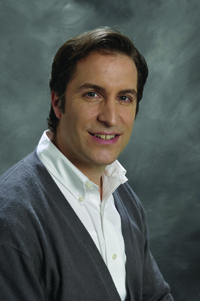 VP, Online Media
AMC
Pisarra is the wizard behind the curtain of AMCtv.com—a vehicle that’s played a significant role in revving up interest for the network’s hits. As the primary shaper of the site’s editorial voice, he guided the launch of unique digital features including “Mad Men’s” personality tests and “The Walking Dead’s” multimedia magazine on its iconic zombies. A creative visionary, Pisarra knows when to bring in complementary talent to heighten AMC shows’ profile such as the addition of Fashionista.com co-founder Faran Krentcil to pen the “Mad Men” weekly fashion column.
If you were wearing Google’s new Project Glass eyewear right now, what would be on your screen?Your Facebook profile picture. I would’ve scanned your name tag then looked you up on Facebook to see to see if we have any friends in common and whether your likes include “The Walking Dead,” “Mad Men” and “Breaking Bad.” I find there’s rarely a better conversation-starter than a shared love for one of AMC’s shows.
Without social media, the world would be just a little bit…Noisier. Think about it. All the teenagers currently texting instead of gabbing on the phone. What an improvement that is! Also, I once had a writing gig that included heated debates with my editor about what would make the best headline among other things—all over email. Even though he was sitting at the desk right next to me! The sound of fingers attacking a keyboard is a lot gentler on the ears than raised voices. Writing also encourages a bit more reflection than talking does. In its own weird way, social media has made us more civil.
If you could only “pin” 3 photos on Pinterest, what would they be? I get real pleasure from fan art related to AMC series, so I’d probably pin a “Walking Dead” variation of the American flag that turns all the red stripes into bloody hands reaching out like hungry walkers, a funny “Breaking Bad” paper doll set that features Walter White in his tighty whities, and a bit of comic book art depicting Don Draper driving a convertible—a savvy meeting of “Mad Men’s” most iconic character and Roy Lichtenstein, one of the ’60s’ leading painters.
Would you rather own a flying car or a jetpack—and why?Jetpack. Why? In a word: Parking.