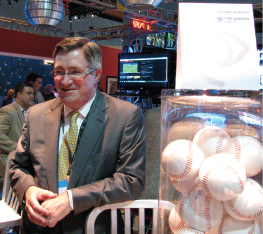 Title: Chairman/President/CEO, Time Warner Cable
Years in Cable: 39Education: AB, Economics, Dartmouth; MBA, Tuck School, Dartmouth
Best Advice in 7 Words or Less: Work at what you enjoy.
Why Him? The ever-agile Britt steers a steady ship. Despite recent losses in video subscribers, under Britt’s studied leadership TWC has grown its ad sales and its business services divisions, and is aggressively expanding into over-the-top services. Calling on his techie background, Britt was the driving force behind the company’s iPad app released earlier this year and that now streams more than 100 live channels to authenticated Time Warner subscribers. The latest iteration of the service turns the iPad into a remote, and this sort of innovation will be key for the MSO to combat erosion in the video business from cord cutting. And now the company is even integrating the iPad into home automation and security… Nice.
Curtain Call: Though he’s low-key as they come in the office, Britt has a theatrical side. He serves on the board of the Manhattan Theatre Club, which brings plays to notable theaters in New York City and throughout the U.S.
Year Ahead: Internet services grew in the most recent quarterly report. The company is betting on business services too. Can these offset video losses? Only 2012 will tell.
Best technique for deterring time-wasting office visits from co-workers: They are never time wasting!!
Favorite sports team: Red SoxFavorite vacation spot: HawaiiWhen I look at my cable set-top box, I can’t help but think: It should look better.Number of companies I’ve worked for since graduating from college? 1